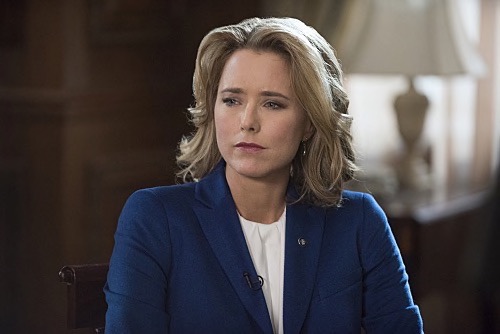 Tonight on CBS Madam Secretary airs with an all new Sunday March 22, season 1 episode 17 called, “Face the Nation” and we have your weekly recap below. On tonight’s episode, Elizabeth struggles to hold herself together emotionally following the attack in Iran.

On the last episode, Elizabeth secretly traveled to Iran in an attempt to prevent a coup that could impact President Dalton’s administration. Also, she brought her staff up to speed on the investigation into Marsh’s death. Did you watch the last episode? If you missed it, we have a full and detailed recap right here for you.

On tonight’s episode as per the CBS synopsis, “Elizabeth struggles to hold herself together emotionally following the attack in Iran; at the same time, she’s working to prevent an ecological disaster in the Amazon and preparing for a national television appearance on “Face the Nation.” Meanwhile, at home, she and Henry disagree about the level of protection Jason should receive at his new school.”

Tonight’s episode of Madam Secretary kicks off with Elizabeth and Henry in bed – her alarm clock goes off and she gets up and gets ready for work. Her kids head downstairs and get ready for school – it’s her son’s first day of public school since he got expelled. Elizabeth heads to work and her team briefs her for her meetings. She has interviews scheduled all day, she snaps that she has to leave early for her son’s orientation.

Elizabeth snaps at Daisy when she calls her a “hero,” she is very on edge since she got back from the bombing and coup in Iran. Nadine tells her that there is a nurse waiting for her in her office – she needs a check-up on her injuries from the bombing and Elizabeth kept rescheduling so the nurse came to her.

Elizabeth heads to a meeting with Harding over the oil industry and the Foreign Corrupt Practices Act in Ecuador – she reminds him that they have given Harding billions of dollars to mine for oil. Harding warns her that if they don’t move forward with the drilling – then the Chinese are going to get the oil.

Daisy and Matt rant to Nadine that they need to prep Elizabeth for her Face The Nation interview – and she is stalling. Nadine reassures her that she will block some time out for her. Meanwhile, Elizabeth and Henry head to Jason’s new school to meet with the principal. Elizabeth sees “shooter drill” written on the calendar in the office and begins acting strangely – she demands thaty they go over the school’s security policies again. Afterward Henry tries to remind Elizabeth that Jason wants a normal school experience. Elizabeth snaps that she is fourth in line for the presidency and Jason doesn’t get the luxury of being a normal student. Henry heads to the office security office to talk to them about Elizabeth’s ordeal in Iran – he talks to his friend and offers him a gig as a security guard.

After meeting with a leader from Ecuador to discuss the preservation of their Amazon trees in the region where they are drilling, Elizabeth sits down with her team to prep for her Face The Nation interview. Matt and Daisy question her about what happened in Iran – Matt tells Elizabeth she has to go in to detail and describe what happened when the bombs went off. Elizabeth has a flashback to Iran, when the bullets and bombs were flying and she was nearly killed. Elizabeth spaces out and doesn’t answer the question – Nadine tells her team to take a break. Elizabeth rushes to the bathroom and washes her face and has a meltdown. Nadine tells Daisy to cancel the Face The Nation appearance.

The next day Jason gets ready for school – he is not thrilled when he meets his body guard, but Elizabeth tells him he doesn’t have a choice. After he leaves Henry begs Liz to talk to him about what happened in Iran – but he refuses. Elizabeth heads to work and meets with her team. Russell barges in and demands to know why she cancelled Face The Nation, Liz has no idea that her team tried to cancel her appearance and reassures Russell that she is doing the interview. Russel sits down with Liz and wants to know why they are spending billions of dollars to protect a rain forest and giving up the oil fields to the Chinese. After work Liz sits in her livingroom in the dark and plays her son’s war video game, Henry joins her and she apologizes for “being such a bitch” earlier.

Elizabeth heads to the office and learns that Jay’s wife has a baby – she video chats with him and learns that the baby’s middle name is Elizabeth. She heads in to her office and meets with a Chinese leader – they begin bickering over the rain forest in the Amazon. Elizabeth brings up his kids and shouts that they will suffer when they grow up if they destroy the rain forest and they will have to go to war over fresh water. Liz begins hyperventilating and stumbles out of her office and tells someone to call 911 – she says she is having a heart attack.

Elizabeth is rushed to the hospital – the doctors inform her that she is not having a heart attack, just a panic attack. He tells her to take it easy and lay off the caffeine. Henry visits Elizabeth in her hospital room, she finally confesses that what happened to her in Iran is affecting her and she breaks down crying. Henry reassures her that it is totally normal for her to be upset about the bombing. Elizabeth says that she isn’t ready to tell him what she went through, Henry says he will be there for her when she is ready and tells her to get some sleep.

Henry leaves the hospital and finds Russell in the waiting room – he has a bouquet for Elizabeth. Henry won’t let him in to her room. He insists to Russell that his wife is fine. Russell snaps that if she isn’t fine – Henry isn’t doing their country any favors by trying to hide it. Meanwhile back at the office Elizabeth’s team is arguing over what to put in a press statement about her trip to the hospital – Blake warns them that if Russell doesn’t think Elizabeth is fine they will all be out of a job. Nadine meets with Chen, the prime minister of China and tries to smooth things over with him after his messy meeting with Elizabeth earlier.

Elizabeth heads back to the office, she is preparing to go through with her plan to save the rain forest – Blake tries to brief her on her meeting with Owen but Elizabeth isn’t listening, she is having flashbacks to Iran. She excuses herself and heads to her office, she sits on the floor and cries and calls Henry, Elizabeth admits that she made a mistake coming back to work so soon. Nadine and Blake head in to the meeting with Owen – they are trying to get his foundation to invest money in a campaign to save the rain forest. Blake tells Owen that if he does – he could win a Nobel Prize for “sticking it to Chip Harding because he wants to drill in Ecuador.”

That night Russell visits Elizabeth at her house, he tells her that her plan to save the rain forest is going through and he should have had more faith in her and her team. Russell sympathizes for Elizabeth and tells her a story about losing someone close to him in an accident – he advises her to “avoid her triggers,” in order to get over what happened in Iraq. That night Liz sits down to play video games and she fills him in on what happened in Iran – and she had to watch her friend die, and his son was right next to him when it happened. Her bodyguard was on top of her – and she couldn’t get to them and help them.