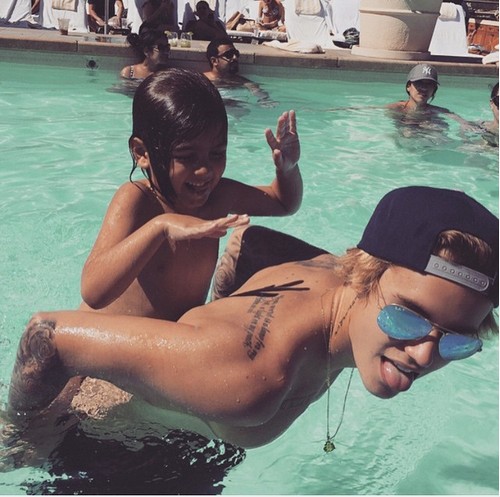 Scott Disick may have thought he was winning the war of the exes against Kourtney Kardashian but this weekend, BOOM, she went nuclear when she revealed her romance with 21 year old hunk Justin Bieber. And in case Scott Disick thought there was nothing to worry about, he should check out the full frontal nudes of Bieber’s equipment that almost broke the Internet.

And if the giant junk wasn’t hard enough on Scott, there’s the fact that Justin has been getting cozy with Kourtney Kardashian’s kids. So is Kourtney Kardashian shopping for more than just a hot young rebound? Has Kourt landed the hottest guy in Hollywood and talked him into playing house with her and her celebuspawn?

Looks like it. Scott Disick has clearly dropped the parental ball and now Justin Bieber may be picking it up. We know Justin loves kids. He hangs with little brother Jaxon Bieber (5) and little sis Jazmyn Bieber (7) all the time, so it’s no surprise that 5 year old Mason Disick adores his new “dad” Justin Bieber.

Kourtney Kardashian posted the above pic just a few months ago of Justin lavishing attention on Mason Disick – – and where was Mason’s real dad Scott Disick? Out partying! Ironically, former hard partyer and bad boy Justin Bieber has cleaned up his act and is now being quite responsible while Scott Disick has gone off the behavioral deep end and is out drinking and womanizing rather than being at home with Kourtney Kardashian and his kids.

Frightening as it sounds, Justin Bieber may be a better dad to Kourtney Kardashian’s kids than degenerate wastrel and all around crap-sack Lord Douche Disick. You know how they say how good you look depends on who you stand next to? Standing next to Scott Disick, Justin Bieber looks enormously responsible, respectable and intelligent – – and quite the catch for Kourtney and her kids. We already know Mason Disick loves the Biebs, so it may not be long before he’s calling him his new daddy.

Kourtney Kardashian and her kids need a real man in their lives and it’s driving Scott Disick crazy that Justin Bieber may be that man – at least for now. It’s bad enough that Biebs is shagging Kourtney with his impressive manhood (documented and confirmed thanks to recent stalkerazzi photos) but the idea of Bieber parenting Mason, Penelope and Reign Disick has to just ice that humiliating cake. Even Scott Disick’s trifling affair with teenage model Lindsay Vrckovnik can’t distract from the embarrassment.

We’re looking forward to more photos of Justin Bieber frolicking with Kourtney Kardashian and her kids – – looks like Kourtney has upgraded to a younger, hotter man who can keep the kids happy and her as well. And here’s also hoping that maybe Scott Disick – – confronted with pics of his ex-GF and kids three kids playing house with Justin Bieber – – will finally get a reality check that he needs to get his act together and be a decent dad to his kids once and for all.

More on the Bieber-Kardashian romance as news develops.