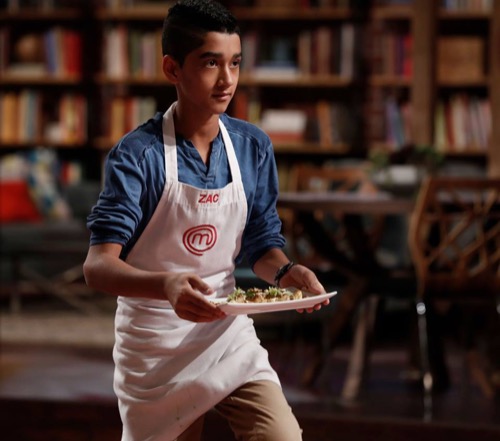 Tonight on FOX Gordon Ramsay’s Masterchef Junior continues with an all new Friday November 27, season 4 episode 4 called “The Good, the Bad and the Smelly,” and we have your weekly recap below. On tonight’s episode, the 18 remaining cooks split up for their first team challenge of the season, which involves creating a large seven-layer dip, and the group that finishes first is safe from the next elimination challenge and gets to choose its ingredients.

On the last episode, The Top 20 junior home cooks face an out-of-this-world Mystery Box challenge with special guest astronaut Tracy Dyson, during which they must prepare a unique dish that highlights a stellar ingredient. The one who rockets to the top will have a significant advantage in the elimination challenge, when the contestants will be tasked with creating a stunning and delicious fish dish in order to move onto the next round Did you watch the last episode? If you missed it we have you covered with a full and detailed recap right here for you.

On tonight’s episode as per the Fox synopsis, “the remaining 18 junior home cooks will face their first team challenge of the season and the first-ever MASTERCHEF JUNIOR team relay race. Each team must create a large serving of seven-layer dip. The team that completes the dip first will be safe from the next elimination challenge, and choose the smelly, wrinkly or spicy ingredients for that challenge. Find out who will smell their way to victory and who will dip lower in the competition.”

Don’t forget to join us for our live recap tonight at 8:00pm when Masterchef Junior season 4 episode 4 airs on Fox. While you wait for the recap, let us know how you are enjoying this season of MasterChef Junior.

#MasterChefJunior begins with the 18 kids chefs running into the kitchen. Graham tells the kids they’re making seven layer dip. Beans, corn, salsa, guacamole and more. Addison says she wishes she could swim in it. Christina tells them it’s a team challenge and they cheer. Gordon says Ian, Avery and Kya are team captains. They get their team assignments. Ian says he’s happy with his team.

Christina tells them to head to their stations. They are then told it’s a relay race. They have to mix salsa, shred lettuce, and take corn off the cob. The last person will do two layers. They move their giant dish forward only when the last layer is complete. The winning team gets to push their judge’s face into the dip. Kya’s team has Gordon, Ian’s has Christina and Avery’s has Graham.

The kids start building their layers in this #MCJRelay. The kids cheer each other on. The first layer is to mash the beans. Kya gets her beans in the bowl. Kya hands off the bowl to Addison. Amaya gets hers from Ian and Adam gets the bowl from Avery. Kya’s team is on stage three. The other two teams catch up. Sam hands it off to Kammily. All teams are tied at the lettuce.

Graham’s team pulls ahead then but the other two catch up. They are scooping guacamole now. Graham’s team pulls ahead again but the other two are close behind. Ian’s team wins it and they bring up the bowls. There’s a bowl of dip on each desk. Ian gets to dunk Christina’s head in the dip. He shoves her face into it and it comes up with lettuce stuck all over her face.

Christina says it seems unfair and she should share this moment with Graham. The kids cheer and he takes off his glasses. Avery saps his face way down into the bowl and he comes up covered to the neck. He puts his glasses back on over all the goop and says it’s delicious. Then they say Gordon seems left out and Kya says she wants to make sure his face goes through every layer.

Gordon also has lettuce stuck all over his face but Graham got it the worse. Ian and his team now get to go to the pantry for an advantage. The judges are cleaned up and Gordon says this is the first time a team gets an advantage. None of the six have to cook and they get to decide as a team what kind of dish everyone else will make.

Gordon says the kids will learn about them a little. Christina says her family says she can be spicy and she reveals under her box is all sorts of spicy seasonings. Graham says sometimes he can be smelly and reveals stinky cheese, liver, and corn fungus. Gordon has ingredients that are wrinkly like he is as he’s gotten older. They’ve got raisins, tripe, prunes and calf brains.

Gordon tells them to pick the most difficult ingredients. The team huddles to talk. Ian gives the team decision. Now the judges come back out and tell the others that Ian’s team doesn’t have to cook and also got to choose ingredients. The other team wheels out a cart of all the smelly foods. It’s an #MCJSmellyFood challenge. The kids hold their noses.

Gordon sends Ian’s team up to the balcony to watch. They get one hour and a limited pantry to make a Master Chef quality dish. They run up to grab stuff and Addison says she wants to use stuff she hasn’t used before but knows it’s a risk that could send her home. Avery is making lamb with a red wine garlic sauce. Derek is making grilled streak with couscous.

Tae-Ho sniffs a sauce and groans. Gordon says he loves fish sauce and he might do Asian shrimp. Gordon talks to Kya who is making poached chicken with cream sauce in truffle oil. Corey tells Graham he doesn’t care for funky food. He’s making pasta with garlic and lots of garlic. Christina goes to Addison who is making soup with Jasmine rice for a Thai dish.

Gordon tells them about Kya’s dish. Graham says he’s worried that Jaeclyn is staying too close into her comfort zone. Christina says Adam might be out of his element since he prefer classic flavors. They talk about how he’s making a mistake frying in truffle oil. Adam’s pasta fell apart and Gordon says he needs to let it rest.

Gordon checks it out then tastes. He asks what she thinks and she says it’s good. He says the depth of flavor is incredible and he’s shocked. He says it’s delicious. He checks her hat for a hidden recipe after teasing her. Addison is thrilled. Graham then calls Derek down who has made rib eye steak with couscous and acorn squash. He says he used garlic and vinegar.

Graham says the steak has a beautiful cook then says it’s perfectly seasoned and the crème fresh sauce if perfect. Next is Kya with her poached chicken with white truffle cream sauce and boiled veggies. She says she’s been using truffle sauce since she was four. Gordon tastes and says it’s delicious and the truffle oil isn’t too strong. He says next time take off the skin but it’s really good.

Next is Avery who made seared lamb chops with a garlic potato cake and red wine garlic sauce. Christina says the lamb is cooked great and the flavor is there but it could use more color to brighten it. She says the potatoes would have been great with some stinky cheese but says it’s a good job. Gordon calls down Jaeclyn who made shrimp and pineapple kabob with lime rice and corn salad.

She says she used garlic. Gordon shows her that the shrimp is soft and wonders if it’s cooked through. He tells her that he loves the rice and the color there. He tastes and says the rice is nice and it could have been good because the shrimp is raw and there’s not enough of the smelly ingredients plus she messed up with the pineapple.

Next is Corey who cooked farfalle pasta with turkey sausage and picked eggs in the marinara sauce. The eggs were blended into the sauce. Christina tastes and says the pasta from scratch shows a lot of skill but says the smelly ingredients weren’t quite potent enough. Nate comes up with his rib eye steak with potatoes and blue cheese. Gordon tastes and says he doesn’t like it – he loves it.

He says the cook on the steak is beautiful and the blue cheese is nice on the garnish on top. He says good job. Graham tastes and says the seasoning is amazing and he loves the potatoes. He says next time work on the presentation a bit but says he captured the essence of the smelly challenge. Last up is Adam. He’s nervous about his dish.

Adam made hand cut pasta with anchovy sauce. He says he used the truffle oil. Gordon tastes and asks if he tasted it and gives Adam a bite. Gordon says the pasta is too thick and undercooked but also reeked. They discuss Corey, Adam, Jaeclyn and Avery as the disappointments. Then they talk about Nate and Addison as impressive dishes. The judges come back out and tell them two dishes stood out.

The first is Nate and the second is Addison who they say won the challenge. Graham then says they have to send some talent home now and call down Corey, Jaeclyn and Adam. Graham says they should be proud of their journey. Christina says two will go home and one did just enough to stay in the competition. Christina sends Corey back to his station – he’s safe but shaken.

Jaeclyn starts crying and Gordon tells them to wear their MasterChef aprons when they cook at home. Christina says at their age, she wasn’t even allowed to pour milk into her cereal. The other kids hug them on their way out. Tae-Ho picks up Adam in a big hug. They head out with goodbye waves from everyone.