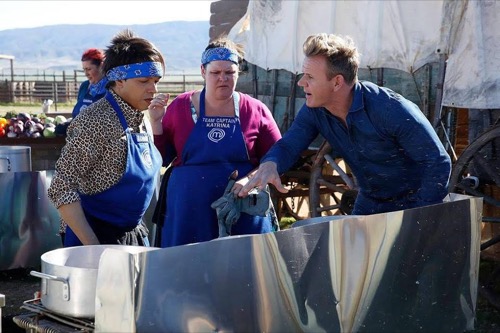 Tonight on FOX Masterchef returns with an all new Wednesday July 22, Season 6 Episode 10 called, “Moo-vers and Bakers.”  We’ve got your recap down below! On tonight’s episode the top 10 home cooks prepare steak meals for 101 cowboys and ranchers. The team that receives the most winning votes moves on, while the remaining cooks face a pressure test that includes baking tarts.

On the last episode, in the next mystery box challenge, the remaining home cooks faced with an assortment of rice. Each contestant had to create a rice dish in 60 minutes. The contestant with the winning dish was featured in Family Circle Magazine and did not have to participate in the next elimination challenge. Then, in the elimination challenge, contestants were tasked with creating dishes based on dynamic duo ingredients. Find out who made it into the Top 10 best home cooks in America and who left. Did you watch the last episode? If you missed it, we have a full and detailed recap right here for you.

On tonight’s episode per the FOX synopsis “the Top 10 home cooks enter the Wild West when they face their next team challenge and create steak meals for 101 cowboys and ranchers. The team that receives the most winning votes will moo-ve on in the competition, while the remaining home cooks will face the next pressure test. Back in the MASTERCHEF kitchen for the pressure test, the losing team will bake tarts and see who can bake their way to victory.”

#MasterChef begins with Gordon and the judges greeting the home cooks out in a pasture. The judges are all done up in cowboy duds. Gordon reminds them they are the top 10 and says they have to feed 101 cowboys from the range. He says the cowboys will be the judges. The losers will face the pressure test. Christine says only one protein can satisfy them – steak – and they have to also make two sides.

Katrina gives Christopher to Hetal. Derrick says he wants Katrina and Hetal says okay because she really wanted Stephen. Katrina is thrilled with her team and says she’s 100% confident they will win. Gordon says one team will get New York Strip and the other gets a hanger steak. Hetal takes the hanger steak on Stephen’s advice. Katrina is thrilled to have strip. The teams go to their outdoor kitchens.

They have one hour of prep time to come up with the menu and get ready. Hetal tells Stephen he’s doing meat and they’re doing potato salad and Shelly recommends BBQ sauce. Olivia says it takes too much time. Hetal wants to grill zucchini and Shelly thinks it’s a dumb choice for ranch hands. Katrina goes with a #CowboyDinner and some whiskey sauce, sweet potato mash and green beans.

The judges talk about how Hetal is at a disadvantage being a vegetarian but Christina reminds them she ruled the Beef Wellington challenge. Gordon says he thinks Katrina is a strong and vocal leader. He says they need smart sides and a stunning sauce to nail this challenge. Gordon says grilled vegetables is more like ladies who lunch and is not cowboy food. He tells her to rethink this.

Hetal is freaking and Gordon yells at her that she’s feeding cowboys and not cows. Hetal is annoyed and decides to stick with her grilled veggies and tells Olivia just to man it up. Gordon comes over and tells Katrina that the sauce is not great and the sweet potato mash isn’t a great choice. He says to put some heat in it. She tells them to add cayenne to the potatoes and Claudia says she can change to a red pepper sauce.

Christopher isn’t happy to be on the grill with Stephen who thinks Christopher talks too much and he just wants him to go away. Christopher gets annoyed, curses him and walks away. Derrick and Nick are struggling to deal with the intense heat of the charcoal grill. The cowboys start rolling in with all their cows. Tommy thinks their “outfits” are sexy. I’m sure the cowboys consider them clothes not outfits. Hetal is freaking because the zucchini isn’t done.

The blue team seems to have their act together but the red team is struggling. The red team can’t start service because the zucchini isn’t ready. Several cowboys leave with empty plates. They can’t get anything unless it’s all ready. Gordon yells at them. Stephen thinks it’s crazy the vegetarian can’t get veggies served. They finally get some veg done and start service. The blue team is moving along smoothly. Graham talks to the cowboys and the blue team gets positive feedback.

The red even gets compliments on the zucchini. Derrick starts freaking out and cursing. Katrina tells him to calm down and step back. She says it’s her in charge not him. The red team has now gotten into the groove now. Hetal says Shelly is working well with her and they’re feeling good. They are down to the last 10 people. The votes are coming in and the reviews are mixed between the two teams. The cowboys vote with red and blue brands.

The blue team rallies around their leader and they have a big group hug. Gordon says all the votes are in and it was a landslide by a 50 vote margin and the blue team killed it. The blue team goes to thank the cowboys and cowgirls. Gordon tells the red team to clean both kitchens and says they’ll face a pressure test. Hetal feels like she didn’t lead as she should have and thinks God is punishing her for cooking beef.

Graham says not all of them have to cook and the blue team – the winners – will get to choose one name to exclude from the pressure test. The #MCSave went to Olivia. That makes sense – Nick says they like her and she’s a great team player. It seems fair sense Olivia was the only reason that they had veg to put on the plate. The pressure test is to make a fruit tart. Christine says there is so much technique involved from crust to custard to glazed fruit.

Christine says a great fruit tart is a work of art to look at and tastes like a masterpiece. Shelly is doing berries and chocolate and Christine says that was smart and a good flavor combination. Graham checks with Hetal who is doing cardamom, raspberry and rose water. He says Stephen has never been in a pressure test and she says baking may cause him trouble. Stephen tells Gordon he’s a bit nervous. Then he defends himself and he and Gordon do a bro-down kind of thing.

But then Stephen’s pastry cracks and he ends up sitting down on the floor and crying. Claudia thinks this was good for her game. Stephen is called up first. He’s upset about loose crème and cracked crust. He made a blueberry tart with apricot glaze. He says the pressure test was sickening. Christine says it would look better with more color and points out the pastry breakage. She cuts into it and the pastry crème is runny. She tastes and says the flavor is really there.

Christine says it’s delicious despite the lack of aesthetics. Shelly is up next with her berries in a classic vanilla crème. Graham tastes and says it’s undercooked in a few places but is good overall. Christopher brings up a strawberry, mint and lemon tart. Gordon says the pastry has a nice crunch. His crème is a little loose. Gordon tastes and says it’s good but looks a mess and says the shell looks incredible. Last is Hetal. Hers is strawberries and blueberries.

Christine says it’s visually stunning but could have used a few more minutes in the oven. She says the crème is a little thin but says she loves the flavor. She says Hetal showed her voice in the tart. Then Gordon calls them all down. The judges go talk and then come back to give the results. Christine says none of them got all of the tart components right. Graham tells Shelly and Hetal that they are both safe. Stephen is worried he’s going home.

Gordon then tells Christopher and Stephen and says to both take their aprons off. He says it’s too close to call and they’re both safe – no elimination tonight! The top 10 stays intact but that means next week, they’ll send home two. Gordon says they’ve never had this before and says they are all very talented and every decision will get more difficult to call. He sends them out with a good night.