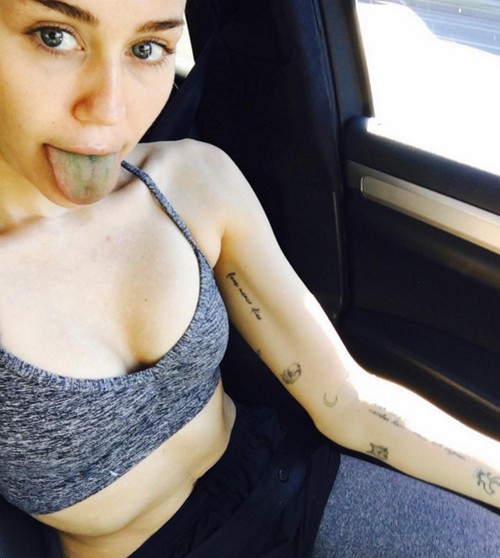 Miley Cyrus posted a selfie to Instagram on Thursday and the “”Wrecking Ball” singer is so skinny that fans are freaking out. Many are commenting on the photo that they are concerned for Miley and fear that she might be going through a really hard time right now based on her gaunt appearance. Some have even asked the former Disney star in the comments if she was having issues with drug addiction or an eating disorder!

The photo that has everyone talking features Miley Cyrus sitting in the front seat of a car in a very skimpy grey sports bra and leggings and a very short pair of black shorts. As usual, Miley has her tongue out and this time it is green. The photo caption reads, “Green tongue!!!!! Sign of good healffffy mornin!” We’re left to assume that Cyrus just sucked down some super healthy smoothie.

It’s possible that Miley Cyrus may have just come from the gym or maybe was heading there based on the outfit and caption. It was Miley’s gaunt appearance that has her fans up in arms though. Cyrus’ arms are bone thin and her exposed midriff is completely sucked in with the singer’s ribs showing.

Miley Cyrus has never been big by any means but especially in that picture, she looks like something is really wrong. That’s why Miley’s fans are asking right on the comments section if their favorite singer is sick. It’s no secret that Miley has been known to dabble in a few illicit substances.

She sings about molly and smokes joints on stage (and blunts on Instagram) so where does she draw the line? Fans are really worried that Miley might have lost control and is partying too hard.

There has also been speculation that the former child star might be suffering from an eating disorder. Miley’s fans are so worried they have been talking about the possibility all over the comments in this shocking picture as well as a few others that Cyrus has posted.

Anyone who pays attention to Miley Cyrus’ Instagram knows that she likes to share pictures of her favorite meals. Up until recently there were a lot of pizza pictures. Cyrus loves pizza so much that her fans were photoshopping pizza pictures for Miley and she would post them to her social media accounts.

Lately though, Miley has been sharing more pictures like the one from Thursday, showing her green tongue because she is being healthy. Other recently posted meals include a plate with a couple of flowers and a bunch of leaves on it. That post was captioned, “Secrets to being beautiful on the inside…. Eat / Drink beautiful thangs!”

Why do you think Miley Cyrus is suddenly so thin? Is the “We Can’t Stop” singer having a hard time stopping some bad habits or is Miley just really trying to get it together and be healthy?