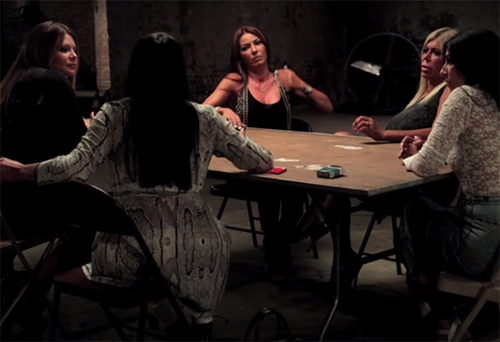 “Mob Wives” spoilers tease that a showdown between Karen Gravano and Victoria Gotti could happen during season six. The duo has had a major score to settle after their fathers had a beef with each other. Karen sat down with VH1 to reveal how she feels about Victoria Gotti and Alicia DiMichelle, and if they ever saw eye to eye on a friend level.

Karen Gravano admitted that she doesn’t have a relationship with Victoria or Alicia. Karen noted that she felt like she has a bond with Victoria Gotti, in that they were both born into the lifestyle. “We didn’t choose this lifestyle. Our fathers did. We didn’t marry in this lifestyle, either. It was our birthright. We both love our fathers and just wanted to stand by them,“ Karen added.

Karen explained that just because their fathers had a problem with each other, doesn’t mean they cannot get along. “On a personal level, I really like Victoria. Our families never got along, and it’s a shame,” Karen said.

Karen implied that her father had every reason to ‘rat’ out John Gotti. Karen stood up for her father, stating that she knows why he did what he did, and the media “doesn’t need to know family business.” Karen backtracked and stated they [Victoria and herself] were affected by their father’s turbulent relationship—so how do they move on now and get along?

Karen admitted she agreed with one thing Victoria wrote in her book. Victoria said, “I love the man, and loathe the gangster life.” Karen explained she understood that mentality very much. Karen said that she cannot speak for Victoria and her family, but she feels that their father’s history shouldn’t define them.

There’s no dying that John Gotti was a legendary mobster; however, Victoria has spoken multiple times she wanted her sons to be better than that, and to learn from their grandfather’s mistakes.

Karen noted that the show had invited people who claim to have ties in the mob, but know nothing of the mob life. They throw words around like “rat.” Karen explained that unless you live the mob life, you will never understand what the term “rat” truly means.

As for Alicia DiMichelle, Karen calls her a fraud. She doesn’t buy she didn’t know her husband was involved with the mob. Karen said, “She’s a liar, and that’s all I have to say about her.”

Do you think Victoria Gotti and Karen Gravano will ever see eye to eye and give friendship a go? Don’t forget to watch “Mob Wives” premiering on Jan 13. Check CDL later for juicier “Mob Wives” spoilers, news, and updates!