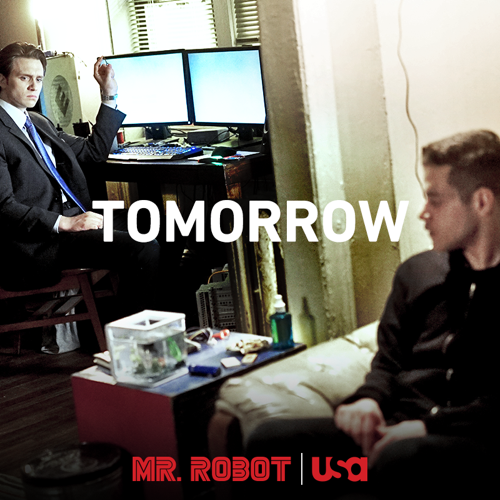 Mr. Robot returns to the USA network tonight with an all new Wednesday July 15, season 1 episode 4 called, “da3m0ns.mp4.” We’ve got your recap down below! On this evening’s episode, Elliot’s [Rami Malek] inner-demons threaten an fsociety operation.

On the last episode, Elliot (Rami Malek) tried to lead normal life – but pulled back into fsociety. gideon (Michel Gill) got suspicious. tyrell (Martin Wallstrom) played dirty @ evil corp. I did it 4 the lulz. Did you watch the last episode? If you missed it, we have a full and detailed recap right here for you.

Tonight’s episode looks like it is going to be great and you won’t want to miss it, so be sure to tune in for our live coverage of USA Network’s “Mr. Robot” at 9:00 PM EST! While you wait for our recap hit the comments and let us know how excited you are for another episode of Mr. Robot tonight.

#MrRobot begins with Elliot showing everyone his plan to take out Steel Mountain with one line of tape. He says if the HVAC gets past 95 degrees, the tape backups will all become unreadable. Mr Robot watches him. He grabs a cassette fro a guy and demonstrates and says they will install this circuit board
there to mess with the thermostat. He says they need the board and the software. Romero shows the specs for Steel Mountain. Elliot says they need one security flaw. Elliot points out all the people and says they are all potential security flaws.

He starts coughing then says they’re done and walks out. His withdrawal symptoms are kicking in. He goes home and does more morphine. He talks about how he needs suboxone but doesn’t have any. He says the morphine needs him as much as he needs it then promises it’s the last line. He says after a couple of bad days, he’ll be clean. He sees some guys on the street he doesn’t like the looks of and shouts at them. He goes back to his apartment with his dog and then there’s a pounding on the door. It’s Darlene. He asks why she’s there.

She says Romero got some clarity on the plan and needs his attention. She asks what’s up, sees the morphine scraps and says he looks like shit. He insists he’s dine. Romero tells him the plan won’t work. He says he did some recon and says Evil Corp is upping the security protocol there. Romero says they’ll have to take care of several other facilities next. He says they are copying and shipping all their data to make hard copy redundancies. He says the plan is DOA. Elliot asks where he got this and he says they’re still in Evil Corp’s network.

Elliot says this is what Tyrell was talking about. Romero rants that Elliot even knows him. Elliot says they still have a few days to make this happen before they copy the tapes. He says they have to go up today. Romero says they’re not ready. The other team members say they can do it and Darlene says she and Trenton will work there and says she’ll hit up her Dark Army content to move up the hack. Romero says the plan is shit but Elliot says it will work.

Romero says they have no idea who will go in physically. Elliot says he’ll do it. Romero calls him a junkie and says he won’t be able to do anything besides jerk someone off for another high. Mr Robot and Elliot talk over the plan while Romero goes to jack a mini van for the trip. On the ride up, Elliot is struggling with withdrawal symptoms. He vomits. They stop at a hotel and hack into a room to let Elliot try and ride out some of the worst symptoms.

Ollie wakes and misses seeing Angela going through his things. She got the CD and says she’s going to meet her dad for brunch. He promises he wants to make up the whole cheating thing to her. She says maybe tonight. She goes to find Elliot but Shayla says she thinks he’s gone for the day and she has Flipper. Angela asks where she is and Shayla says she has no idea. She asks if Angela wants to walk with them and she agrees.

Trenton works on code the notices a scarf Darlene left and tries it on. Darlene calls her a klepto. They wonder where they guys are and why they haven’t heard from them. Darlene says she didn’t reach her Dark Army guy and they wonder if their plan was too ambitious. Trenton says they need to hit China’s data center simultaneously. Darlene says she forgot it was Sunday and knows where her contact will be. Trenton says she’s coming but Darlene says no way. She insists and Darlene has to let her come along.

Shayla offers Angela a tab of x and says it will help her see past what’s bringing her down. Angela says she doesn’t do drugs and Shayla says no take backs and says it will help her figure her shit out. She pops her tab and then Angela does too. Darlene and Trenton go to an underground table tennis joint. Darlene tells her to chill and says the guy will show. Elliot is in bad shape. Mobley and Romero wonder if they should dump him at a hospital or just split and leave him there.

Romero says he’s there and is dead weight. Mr Robot yells, if you want to leave, leave. Romero walks out with Mobley behind him. Elliot says he just needs one hit to get him back on the road. Mr Robot says fine – one hit.

F Society interrupts an Evil Corp commercial to say they must meet their demands or face destruction. Mr Robot drags Elliot out of a taxi and into a crappy part of town. He says they need a helping hand. They head into a drug den. He tells Elliot the minute he’s done that he needs to leave without looking or talking to anyone. Elliot nods and goes inside. He asks for morphine but they hand him a syringe and tell him it’s all they have. A girl says she can help him. Elliot wonders how low he’s sunk to this.

The girl shoots him up and he groans. She kisses him on the mouth. There’s a gunshot outside then a scuffle breaks out in the house. The girl near him is shot then Elliot is shot in the shoulder and goes down. An F Society comes on the TV and talks about profiteering, governments and their corporate masters. It interrupted a weather report about humidity coming. Elliot goes into the TV somehow and the guy in the mask hands him something then takes off his mask.

He hands it to Elliot and says it’s just for his head, made in the Orient. He tells him to turn the key. We see an Evil Corp ad about all the stuff they sell. Elliot is on the street in daylight and sees a notice on a power pole. The paper says Error 404 Not Found. He hears a little girl singing as she rides her scooter up to him. He calls her friend and she says they’re not. He asks what happened in that house and she asks what’s his monster. She hands him the key and says he dropped it. She goes off humming.

He starts humming the same song. Elliot comes back to his place and finds Qwerty his fish talking to him and Tyrell at his computer. Qwerty complains about being stuck in the same shit every day. The fish yells at him to move him to a GD window. Angela sits eating fish and Elliot says she’s eating his friend. She says his friend is delicious and offers him a bite. He sees a woman forcing a child to eat at a nearby table. She holds his face in her hand and pushes the bite into his mouth.

Elliot is served a hot slice of raspberry pie by the waiter – a “raspberry pi” is actually slang for a micro PC the size of a tiny circuit board about the size of an Altoid can. He bites into it and finds a key. Angela says, yes Eilliot, I do as if he proposed. She hug shim and everyone cheers. Elliot goes into the Coney Island F Society HQ and he’s in a tuxedo. He finds Angela waiting in a wedding dress. She says she just told those people in there what they wanted to hear and says he won’t do it.

She says he won’t change the world. She says he was only born a month ago and is afraid of the world, afraid of his monster, afraid to even know what it is. She hands him back the key and says it doesn’t fit. He asks why not. She says, it’s obvious – you’re not Elliot. Then he’s in darkness and hears kids giggling. He calls out hello. No answer. He finds the mask and wonders if he’s still alive and if it’s his monster. He puts the mask on and says he’s there and you’re alone. He sits up in bed in the hotel.

Trenton follows her. They get into the limo and there are two men there wearing masks. One yells in Chinese. They demand their cell phones and the girls hand them over. They throw them out the window then drive off. Angela ignores a call from Ollie and asks Shayla what she’ll do for money now her drug dealer is locked up. She says she’ll be a hottie waitress. Angela asks if she’s worried but Shayla says worry is a waste of time then asks Angela if she worries a lot. She admits she does. Shayla kisses her.

Then they start really making out. Shayla tells her to look in the mirror. She does. She tells her she’s a bad ass bitch and that’s the only person she should ever worry about. She dances around with her. The Chinese drop off Darlene and she smacks the guy she was looking for. He tells her she needs to chill. It’s the guy with the rap CD – Cisco. She says he’s mad because she dumped him. She says tomorrow is their only shot but he says they never had one. He says the guys he work for aren’t motivated like her.

He says he’s warning her for the last time. Cisco kisses her. She says he knows how much this means to her. She begs him please to just talk to the Chinese. Romero mixes up Elliot a home remedy for his stomach. He says he’s going to pull the van around and tells Mobley to make sure he keeps chugging it. Elliot thanks him and Romero says it’s cool. Elliot is happy to be getting back to normal. Darlene wakes to find Trenton praying to Allah.

Angela goes to the office using Ollie’s badge and pops in Cisco’s CD at his desk. Someone else gets off the elevator. She tries to get the CD out of the drive and it sticks but then she wrestles it out. She sneaks back out of the office. Elliot talks about forces that manipulate us. He drives on with the guys towards Steel Mountain.