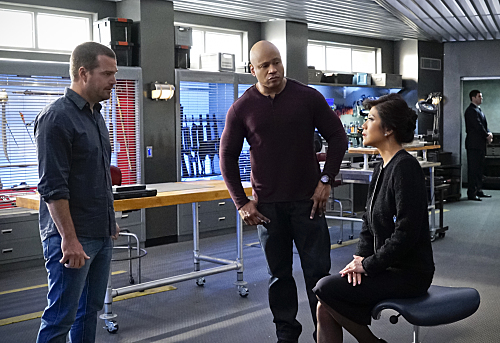 Tonight on CBS NCIS: Los Angeles continues with an all new Monday January 19, season 6 episode 13 called, “In The Line of Duty,” and we have your weekly recap below. On tonight’s episode, Callen and Sam are sent on a dangerous mission to obtain key evidence, after a U.S. ambassador narrowly escapes a terrorist attack at the U.S. Consulate in Tunisia.

On the last episode, while Callen was undercover in the mail room of an office building to investigate an arms dealer, it was taken over by terrorists and Callen became a hostage. When the team arrived to help, they discovered the entire building was wired with explosives. Did you watch the last episode? If you missed it, we have a full and detailed recap right here for you.

On tonight’s episode as per the CBS synopsis, “after U.S. Ambassador Nancy Kelly narrowly escapes a terrorist attack at the U.S. consulate in Tunisia, Callen and Sam are sent on a secret, dangerous mission to obtain key evidence from the crime scene. Upon their return, the team seeks Kelly’s help to provide missing information.”

The team was called in on a red alert on tonight’s episode. It seems US Ambassador Kelly barely escaped a failed assignation attempt at the US consulate in Tunisia. However Kelly’s security detail, including a good friend of Sam’s, weren’t as lucky. They died trying to buy her time she needed to escape and now everyone wants answers. Most especially, Sam.

Hence, the team opening an investigation into the near fiasco is personal. Sam wants to know how the terrorist came so close to the consulate that they ended up getting so close to Commander Harris they were able to kill him. Meanwhile, Washington simply don’t want a repeat of Benghazi and the fallout from that.

So, you see, this incident has put everyone on edge. If the terrorist had succeeded with their mission then Kelly would have been the seventh ambassador assassinated. And something like that makes people like Captain Beck fed up with using diplomacy when really he wants something to be done already. Commander Harris was one of his men and so the Captain told Kensi and Deeks that off the record he doesn’t want them to bring back perpetrators – he asked them to bring back bodies instead.

However, Beck turned out to have more answers than anything either Sam or Callen could find at the scene in Tunisia. The boys came back from their trip and yet they didn’t have much to say for it. But the rest of the team eventually found out that Harris had gotten a personal visit from his boss and that Beck had lied when he claimed he hadn’t seen Harris in a while.

According to reports, Beck and Harris had a meeting behind closed doors. And whatever they talked about – Beck is not repeating. Kensi and Deeks paid him another visit and he willing chose to stonewall a federal investigation rather than tell him about his meeting with Harris.

Yet, the team couldn’t figure out why the captain hadn’t changed his stance after there was a shooting right in front of his office. The very same people that had attacked the ambassador in Tunisia have now followed her to the states to finish what they started. And still Beck refuses to discuss his meeting with Harris.

So when they couldn’t get Beck to comply – the team put out a surveillance on him. Though that only yielded one vital piece of information and that was he was colluding with the CIA.

But it’s not like they could just ask the CIA about Beck and without their help – they would never know what Beck has been doing. Or what he talked to Harris about.

Yet a picture would go to show there is at least one person that knew what all the secrets and road blocks were about and that was Kelly. She was photographed arguing with Harris a few days before the consulate was attacked. So she was asked (despite the risks) to come to NCIS Los Angeles headquarters.

There, she filled in the team with what little she knew. It seemed Harris had been running a risky op she hadn’t known about. And when she did learn of it – she confronted him. She wanted to know who was involved with this op and he refused to tell her.

Then they were attacked and she dropped the issue. But Kelly saw what neither Sam nor Callen did. She saw that whoever had been running a surveillance on the consulate wasn’t really after her – she was barely in the pictures – Harris on the other hand appeared to have been followed everywhere he went. So he must have been the real target all along.

But then that didn’t explain why she was attacked again in front of Beck’s office. At least until Kelly admitted Beck was the only other person besides Harris that knew what this secret op actually entailed. So whoever had targeted Harris was also now targeting his boss. Who the team soon found out they had to recuse.

Beck was forcibly taken from his home and whoever kidnapped had left behind too many clues in their wake.

The man that had started this all was Munir Al Zarzi. He’s a known terrorist that has a penchant for beheading his victims. So when the team hit him – they knew they would have to act fast and hard. Else Beck could die in the process of his own rescue.

Though no one expected Deeks would be the hero of the day. Deeks managed to sneak up behind Munir and knock him out cold before the other man could even finish his rant about evil America.

And even though he was bruised – Becks hadn’t told the terrorist anything and he still refuse to talk about the op with NCIS.