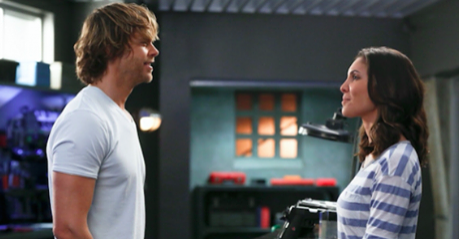 Tonight on CBS NCIS: Los Angeles returns with an all new Monday November 9, season 7 episode 7 called, “An Unlocked Mind” and we have your weekly recap below. On tonight’s episode, Kensi (Daniela Ruah) and Deeks (Eric Christian Olsen) go undercover as cult members to rescue a former Department of Defense employee brainwashed into revealing classified information.

On the last episode, Ducky revealed his participation in a secret society devoted to solving cold cases when NCIS investigated the murder of a retired lieutenant who was also a member of the secret group. Did you watch the last episode? If you missed it, we have a full and detailed recap right here for you.

On tonight’s episode as per the CBS synopsis, “Kensi and Deeks go undercover as cult members to rescue a former Department of Defense employee brainwashed into revealing classified information, as the rest of the team work to prevent the cult from selling government secrets.”

Tonight’s episode looks like it is going to be great and you won’t want to miss it, so be sure to tune in for our live coverage of CBS’s NCIS: Los Angeles at 10:00 PM EST! While you wait for our recap hit the comments and let us know how excited you are for the season 7 episode 7.

A woman by the name of Kate Ramsay came to the NCIS’ attention on tonight’s episode when she claimed her husband was being held against his will by a cult-like church.

Kate’s husband was David Ramsay and he was a former Department of Defense. Apparently David used to be a DARPA engineer, but after his brother died, he began looking for meaning in his life and found the Church of the Unlocked Mind. Only Kate said the church ended up doing more harm than good and that enlighten never came.

Unfortunately, she and her husband were immediately separated upon their admittance into the church. And in the few months that they were there, Kate was constantly kept away from her husband. In fact she later told both Sam and Callen that it was like the church wanted to break up her marriage so that they could keep David all to themselves.

And once Kate saw what they were really doing, she couldn’t stay. So she ran and she would have liked to have run with her husband but the frequent separations meant only one of them could go and Kate was it. Therefore she was given a chance to escape and her husband was left trapped at the Church’s compound.

But the reason Kate’s concern for husband had garnered federal interest to begin with was because her husband had been working on a new 50 caliber guided bullet for the DOD before he left and so his former superiors wanted to know what David could have said during his auditing.

Auditing was a stage that every oncoming member had to go through in order to join the Church of the Unlocked Mind. Only the process requires something total honesty. As in members had to discuss their lives before their church and they weren’t allowed to hold anything back. Not even say government secrets.

Though oddly David wasn’t the only person that was high profile before joining the church. The church had also welcomed several CEOs and actors. And there appeared to be another thing that many church members had in common – they all had access to otherwise private and profitable information.

So the NCIS looked into that angle and it turns out the church’s spiritual enlightenment was a front. It made its money from corporate espionage and things had subsequently changed for them after David joined the church. Because not long after he did, a high-ranking church member was caught on surveillance meeting with a man the US government suspects is a spy for China.

And so the NCIS had to send people in. However Kensi and Deeks might not have been the best choice. On one hand they can be especially great at their job but on the other things have changed for them since they’ve become a couple.

For instance Kensi was supposed to go inside the church’s complex as a drug addict that slept her way through Hollywood producers and governors to fund her habit but she nearly risked that very same cover when Deeks had an issue with his earwig. Deeks had apparently left the thing in his ear even as they were about to “receive” their baptisms and so he came up with a plausible story for why his head shouldn’t be dunked under the water. He said he had near fatal accident when he was a child.

And at first, the guys dunking him appeared to be understanding. They told Deeks to trust them and the moment they got the go ahead from the man in charge they then set about practically drowning Deeks. Though later they claimed to have been helping him face his fear.

So the church members weren’t people that either Deeks or Kensi wanted to mess with. But they went in undercover to get David and couldn’t leave without him. That’s why they stayed on despite their baptism and why Kensi went along with the women to their side and Deeks stuck with the men.

Yet Kensi ended up being in more danger with the other women than Deeks was with the men. It seems that the women have all been brainwashed into believing that he had to please Lee. Lee being the man in charge. So they had drugged Kensi’s wine and was prepared to rape her in order to please Lee.

Kensi though was able to fight through the drugs and escape before she could be shown her “new beginning”. And she was off wondering the walls on unsteady feet while Deeks had finally come across David. David had been sent to the Discipline Arena because his wife had escaped the compound and he was in the middle of being tortured when Deeks quietly told him he could get them both out.

Which was a promise that he barely managed to keep.

The church members had all been brainwashed into attacking whoever they saw that was trying to run. So the hordes of people coming after Deeks and David. And when they eventually found the still drugged Kensi – she was slowing them down.

But the guys got lucky. Their team moved in even when they didn’t receive the go ahead from the attorney that the Department of Justice had sent in to oversee the case and they found their agents before they were made to disappear like countless others that had defied the church. So David was reunited with his wife.

Though he nearly put state secrets into the Chinese’s hands and the reason he won’t be held accountable for that was because of Sam and Nell. The unlikely duo found their spy and church member hiding out in a car parking lot before a deal could go through. So the bullet is safe.

And funnily enough Hetty skyped in just when Deeks and Kensi were expressing their joy of being alive.