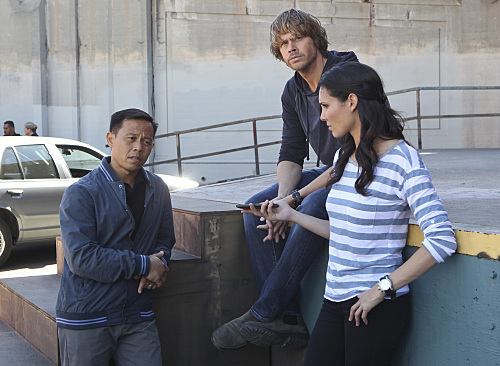 Tonight on CBS NCIS: Los Angeles continues with an all new Monday February 23, season 6 episode 16 called, “Expiration Date,” and we have your weekly recap below. On tonight’s episode, Sam [LL Cool J] is shot while trying to apprehend a spy contracted by the CIA.

On the last episode, Callen and Sam were kidnapped when they followed an anonymous tip about a missing NSA agent. When the team discovered they were missing, they realized it may have been a trap set by terrorists. Did you watch the last episode? If you missed it, we have a full and detailed recap right here for you.

On tonight’s episode as per the CBS synopsis, “Sam is shot while trying to apprehend a spy contracted by the CIA. The team enlist the help of Thapa, the elite Nepali soldier from their past, to help locate the shooter. Meanwhile, Kensi and Deeks have their first official argument.”

The elite Nepali soldier Thapa is back on tonight’s all new episode of “NCIS: LA”. It seems India sent him after a woman named Ella Desai. Ella, who worked on certain nuclear projects back in India, had wanted to hand over information to CIA in exchange for citizenship and protection. However India didn’t want her to reveal too much information. Hence Thapa was sent in to retrieve her.

But, during a confrontation with Sam and Callen, someone (that is a third party) tried to take shots at Ella. This person thankfully missed their intended target yet Sam was shot attempting to protect her.

India, of course, is denying all accountability and to prove that they’re even offering their assistance in finding this would be assassin. They’ve given the NCIS team Thapa to use. And Hetty has no reason to turn him away. She’s choosing to believe Callen when he said Thapa was just as shocked as they were when someone started to fire at them and that means Thapa is going to be filling in for Sam. The one missing person from their team.

So, naturally, Thapa is doing his best to help. Though, this investigation is starting to its toll on him as well as on Callen. Callen, for his part, hasn’t been doing so well with his partner and best friend in surgery. And as for Thapa, his belief in his handlers was inadvertently shaken. Because while he was at first positive his people were innocent of the assignation attempt – he later found evidence of another elite soldier.

Ella didn’t know why anyone would want to kill. Or if she did then she was keeping mum about it.

Thus, the team was essentially shooting blind as they tried to carry out this investigation. And unfortunately that meant they wounded up in someone’s trap instead of finding answers.

Going up against a squad of Nepalese soldiers, Kensi, Callen, Thapa, and Deeks were able to fight their way out of the trap. But the answers they eventually found didn’t seem to make any sense. Especially when it was proven their assassin was actually after Thapa and not Ella!

So that begs the questions as to who wants to kill Thapa?

Thapa thinks it might be his own people that set him up and if so he wonders if Ella was also part of the trap. You see Ella was originally not considered all that valuable. As a potential asset that is. Yet, when Sam got shot and not only was Thapa sent but then a team of former soldiers came after him – Ella’s value suddenly went up. And the CIA couldn’t wait to get their hands on her.

Thapa, once he started to connect the dots, then tried to get answers out of Ella. Though by then it was already too late because the CIA had taken her into protective custody. So Thapa now believes his people are prepared to kill him in order to plant a double agent.

And that in turn made him worry about his family back home. For instance what’s going to happen to wife and children now that he has a price on his head?

Sam woke up in the hospital and the first thing he had asked for was Callen. Apparently, he never got the chance before he was rushed to the hospital to warn his friends that he had seen Ella plant a tracking device on Thapa. Hence, by time they found it, it was already too late.

Thapa had tracked to Sam’s hospital room and another group of soldiers was sent in to kill him.

This time, however, they completed their mission regardless of everyone’s best efforts to stop them. And do you know what happened after Thapa was killed? His government had the nerve to cover up what they did by granting him a posthumous award for bravery.

It seems that Thapa’s government is claiming it was terrorist that attacked Thapa and thanks to Ella getting caught in Thapa’s eventual death. Both her government and the CIA have dropped her. Meaning she’s on her own. And she’ll stay that way, even in prison, unless she provides the NCIS team with names!