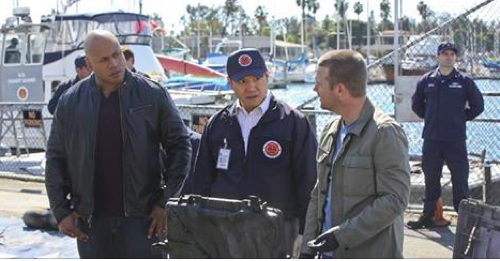 Tonight on CBS NCIS: Los Angeles continues with an all new Monday March 30, season 6 episode 19 called, “Blaze of Glory,” and we have your weekly recap below. On tonight’s episode, the team investigate when a missile test is hijacked and the missile is sent off course. Hetty [Linda Hunt] brings in a young computer specialist to assist in the probe, but Nell [Renée Felice Smith]  becomes jealous when the tech guru and Eric [Barrett Foa] start to bond.

On the last episode, the team investigated when three FBI agents were killed in an explosion following a successful undercover sting operation. Meanwhile, Deeks and Kensi realized Hetty knew about their relationship when she paired Kensi with Sam, and Deeks with Callen during the probe. Did you watch the last episode? If you missed it we have a full and detailed recap right here for you.

On tonight’s episode as per the CBS synopsis, “When a missile test is hijacked and sent off course, the team searches for the hacking group responsible for the attack with the help of a young computer specialist Hetty brings in to assist the team. Also, Nell sees the bond between the tech guru and Eric and she becomes jealous.”

Tonight’s episode of NCIS Los Angeles kicks off with a test run of a new missile. After it is fired the engineers begin panicking because someone overrode their destination and it is heading straight for a civilian boat. They watch in horror on their computer screens as the missile blows up the boat.

At the office the next morning, Marty, Daniela, Callen, and Sam are briefed on ADRD’s missile disaster. They have no idea if anyone was on board of the boat that exploded, Henrietta orders them to find out who hacked the missile and shut it down. Marty is going to contract Mission Control and find out what they know about it since the FBI systems were just hacked last month. Callen and Sam head to the docks to meet with the coast guard. They are dragging the ocean – so far they have not found any human remains from the explosion. The coast guard found a water proof case that was on board the boat – Callen opens it and finds 48 vials on Fontanel. They think the boat may have belonged to a drug dealer.

Marty and Daniela arrive at ADRD, their tech guys are working on the computer system and trying to figure out how their system was hacked. They realize that one of the employees, a guy named Doug, received an email inviting him to a Navy event and when he clicked on the email it uploaded spyware on his computer. Marty sees the list of recipients that the email went to and realizes it was people in the Army, Navy, Airforce, and Marines – which means that all of those agencies have been infiltrated by the same hackers.

Callen and Sam get a partial ID number from off from the boat. They run it through the DMV and learn that it was registered to a dentist named Stanley Maslow. They head to Semi Valley to track down Stanley – he is shocked to hear that the boat was blown up. He rants that it was parked at Marina Del Rey. They correct him and inform him that it was off the coast and nowhere near the marina. Stanley says that his son was staying on the boat, but he slept at his friend’s house last night and he is safe. Stanley says that his son Wyatt is a bit of a loner and an inspiring architect, he doesn’t think that anyone would have wanted to kill him. He explains that the Fontanel was completely innocent and he sails down the coast to help underprivileged people with dental work. Callen and Sam aren’t buying it.

Daniela and Marty track down Wyatt at school – he says that his ex-roommate Josh was a computer science major and they were fighting for months. He thinks that Josh might be responsible because he has “mad computer skills” and he is mentally unstable. Meanwhile, Callen and Sam are keeping an eye on Stanley’s house. They spot a woman in a black SUV dropping off a package, when she leaves they decide to follow her. As soon as they pull out, two police cars barricade them and pull their guns on them. The cops order Callen and Sam to get out of the car – they should that they are federal agents. The cops apologize and say that they thought they were burglars.

Daniela and Marty head to Josh’s dorm room – he isn’t there, but they head inside and snoop around. They open his computer and the flash drive explodes and the screen says “nice try loser.” Josh definitely has some serious computer skills to rig his laptop like that.

They pull security cameras from the marina, but it isn’t helpful because they weren’t running between midnight and 8 AM. Jones does some research in hacker chat rooms and learns that a group named “Disavow” is responsible for taking over the missile and Stanley’s roommate Josh is a member of Disavow. Henrietta brings in an intern who specializes in hacking and goes to Stamford to go undercover and try to infiltrate Disavow.

Sam and Callen track down Mally, the girl that dropped off a package at Stanley’s house. She explains that Stanley’s son Wyatt is her boyfriend and she was just dropping off some blueprints that he left at her house. Mally explains that Josh was a “total creep” and he tried to hit on her but she turned him down and started dating his roommate. Sam thinks that the missile may have been payback for Stanley stealing Mally from Josh.

The intern Blaze chats with Josh online and he agrees to meet him in person, he has no idea that she is working undercover. She tells him that she wants to join Disavow. While they are sitting at the park chatting about the hacking group – Kensi and Marty are posing as a married couple near by and keeping an eye on Blaze. Suddenly a kid on roller blades rolls past them and steals Blaze’s backpack and then is whisked away by another guy on a scooter. While Kensi and Marty are going after the laptop, they notice that Blaze and Josh have disappeared.

Jones and Eric pull Josh and Wyatt’s text messages – they are a little confused because there are no bad texts between them, and they were supposed to hate each other. Meanwhile, Josh takes Blaze to a house full of computer hackers and nerds, they were the ones that stole her backpack because they wanted to make sure she was the real deal. Josh gives Blaze a tour of the house, and she sits down to play video games with him. Kensi and Marty create a disturbance outside of the house – and Blaze sits down and hacks in to his computer and finds emails proving that he accessed the missile. Josh catches her and attacks her, but Marty and Kensi come to her rescue. They question Josh and go through his computer and realize that the leader of Disavow, a man named Isaac, actually framed Josh and put the software on his computer.

Eric and Jones track down Isaac and learn that he is none other than Josh’s old roommate Wyatt. They bring Wyatt in for questioning and he explains that he framed Josh because he tried to rape his girlfriend Mally. They do a background check on Mally and learn that her parents were actually Indonesian terrorists that were killed by the US Army. Mally is out for revenge and used Wyatt and Josh’s computer hacking skills to get access to the US’s army and Navy computer systems.

Wyatt says that ally doesn’t have access to the codes he stole, they are in a safe at his dad’s house. Wyatt heads to his dad’s house with Callen and Sam and find that ally has already been there – she shot his dad in the head and killed him and emptied the safe.

Kensi and Marty head to Mally’s apartment and it has already been cleaned out. They pull the security camera footage and realize that two men with Mally appeared to take their intern Blaze hostage and left with her. Sam and Callen track down Mally’s car at the school’s theater – they head inside and Mally’s guys begin opening fire on them. Mally takes Blaze hostage at gun point, Blaze fights her off and Mally takes a run for it. Sam and Callen chase ally in to Hermose Park and it is like a jungle – they have no idea which way she went so they decide to split up. Mally takes another pedestrian hostage, she tries to fire at Sam, and he shoots her dead. They find the hardware that she could have used to take down the entire country hidden in a puppet in her backpack.