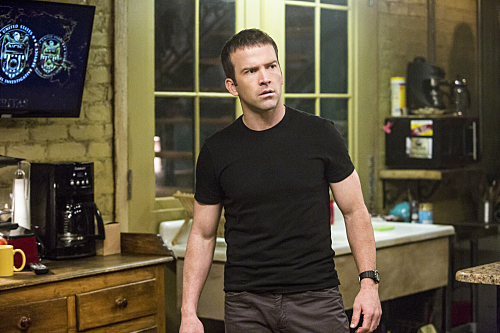 Tonight on CBS NCIS: New Orleans returns with an all new Tuesday February 24, season 1 episode 16 called, “My Brother’s Keeper,” and we have your weekly recap below. On tonight’s episode, a Navy recruiter is killed when she becomes the target of a deadly hit and run.

On the last episode a Petty Officer was murdered during Mardi Gras, and the team investigated which parades and parties may have led to his death. Meanwhile, Pride struggled to decide which aspects of his strained relationship with his father he was willing to share with his daughter. Did you watch the last episode? If you missed it, we have a full and detailed recap right here for you.

On tonight’s episode as per the CBS synopsis, “a Navy recruiter is killed when she becomes the target of a deadly hit and run. The investigation focuses on whether the murder is linked to her career or her role as a foster mother to two brothers. Meanwhile, Lasalle grows increasingly concerned for his brother’s welfare after welcoming him into his home.”

Tonight’s episode of NCIS New Orleans kicks off with a woman in uniform in a dark parking lot. A car comes careening around the corner and speeds up and appears to intentionally run her down, they speed off and leave her lying on the pavement unconscious.

Christopher arrives home and finds Remy painting his apartment, he nonchalantly explains to Chris that he tightened the water pressure in his shower for him too while he was out. Chris heads to his closet to get dressed and realizes that Remy has reorganized his closet too. Remy explains that he can’t afford to pay him rent, so this is his way of giving back. Chris is scared that Remy has been up all night and is being manic again, his bipolar is kicking in. Remy reassures him that he is taking his medication and he is staying away from his triggers – booze and ladies.

Chris gets a phone call and learns that there is a dead body. He leaves and heads to the parking lot, Maggie Barringer was run down and killed, she has done three tours in Iraq and was now working as a recruiter. Whoever the driver was hit another car in the parking lot before they drove off. There are no skid marks, so the driver didn’t even try to stop when he ran down Maggie. It’s obvious that Maggie was ran over intentionally, she doesn’t have any next of kin – but she did have two foster children.

Merri and Chris head to Maggie’s house with Pride, he breaks the news to them that Maggie’s hit and run was intentional. Her older son Danny is floored when he learns that someone killed Maggie on purpose. The social worker arrives and says that CJ is going to another foster home, and Danny is going to a group home. Pride pleads with the social worker to have some compassion and not split them up but the social worker says there are no other options and drags CJ out of the house kicking and screaming. Danny is furious and punches out a glass window after his brother leaves.
The next morning Chris does some background checks on Maggie, there was nothing out of the ordinary in her finances. The largest withdrawal she had ever made in the last year was $400. Her co-workers do say that the day Maggie was killed she showed up for work an hour late and was visibly upset.

Merri and Pride head to Sebastian’s lab to see what he has on Maggie’s hit and run. He reenacted the crash and has determined that she was hit by a grey sedan. The broken headlight they brought him has a weird substance on it and they haven’t identified it yet. Pride is surprised to hear that Danny has shown up to the morgue and is in the other room with Dr. Wade – he wanted to see Maggie. Danny explains to Dr. Wade that Maggie took him in after he spent two years in juvey when no one else wanted him. After Danny leaves Dr. Wade fills Pride in on her report on Maggie, her time of death was at 9:00 PM. From the enamel on Maggie’s teeth and signs that she was malnutrition when she was young – Dr. Wade came to the conclusion that Maggie grew up poor just like her foster kids.

Chris pulls Maggie’s emails and learns that she was going after CFP, the private foster care agency that placed Danny and his brother in her home. She was accusing CFP of not paying out any of the money that they were receiving from the state to support the children. She was paying for everything for CJ and Danny out of her own pocket. There were also text messages to another foster care parent named Jane. Chris and Merri pay Jane a visit and Jane explains that a man named St. Croix runs CFP and he is a scam artist – he was already arrested for fraud and indictment. Maggie was determined to take down St. Croix, he had pocketed $1 Million. Chris and Pride head to St. Croix’s office and confront him, he is the same social worker that picked up Danny and CJ the night before.

St. Croix insists he didn’t kill Maggie. He tells Pride to tell his wife that he “got in over his head” and then turns around and dives through his office winder and falls several stories to the ground.

St. Croix is dead, and his lawyer confirms that he was with him until 10:00 PM and he couldn’t have killed Maggie. Dr. Wade reveals that Maggie had a broken bone on her arm that was broke about a month ago and never set by a doctor. It appears to be a defensive wound. Merri talks to Maggie’s neighbor and learns that Maggie had a boyfriend – he owns the sandwich shop that Danny works for and was his boss. Sebastian gets a lead on the car that hit Maggie – the paint was made between 1994-1999, so it was either a grand am or a Camaro.

Chris and Merri head to the sandwich shop to meet Maggie’s boyfriend Anthony, he insists that he hadn’t drove a car since he was a teenager. While they are talking to Anthony they find a photo at his register of Danny and Anthony posing in front a gray Camaro. Anthony says that it is Danny’s car and he was using it to run deliveries for him. Chris and Merri head to the group home to find Danny but he is missing, they search his locker and find drug paraphernalia. Apparently Danny is a drug dealer and selling PCP.

Chris heads to the prison to meet with a drug dealer that is familiar with Angel Dust and PCP in New Orleans. Chris offers to help lighten his sentence if the drug dealer can get some information on where Danny is or who he is working with. Back at the lab Sebastian has finally gotten a trace on the headlight substance – he says that the last place that the Camaro was is somewhere where they make rubber tires. There are no tire factors in New Orleans – but there is a park made out of recycled tires. They head to the place where the tires are ground down to make the rubber equipment at the park. The manager at the plant confirms that the Camaro reminds to one of his employees – a man named Bull. He hasn’t showed up to work for two days, but the day Maggie was killed he left work at 4:30.

Chris gets a lead on the drugs that Danny was dealing – Pride and Maggie meet him at the drug house and they storm in with their guns drawn. The house appears to be empty, they find Danny in the kitchen packaging PCP. They arrest him and demand to know where Bull is and if he ran over Maggie. Pride starts yelling at Danny that Bull is “trash” and he needs to tell them where he is. Danny screams in Pride’s face that Bull is his and CJ’s real father – and he is all they have.

They bring Dannny in for questioning – he insists that he was just helping his dad because he needed money to give to Maggie. They get a phone call that CJ has gone missing from his foster home. Danny finally caves and starts to talk and he says that Bull was putting CJ on the bus with a backpack full of PCP because no one would suspect a kid with a backpack on his way to Mobile. Chris and Pride rush to the bus station with Danny – they spot Bull and CJ. Bull sees the police and pulls a gun on his son CJ and takes him hostage. He orders Danny to go get the car, Danny pulls up in the Camaro and Bull throws CJ in the back seat. Danny drives off before Bull can get in the car with his gun and Pride arrests Bull.

Back at the police station Pride sits down with Danny. He reveals to him that they searched Bull’s apartment and they found a petition from Maggie, she was trying to get Bull to sign over his parental rights so she could adopt them. Bull killed Maggie so that she didn’t take his sons and drug mules away from him. Dr. Wade interrupts them and offers to let Danny and his brother CJ move in to an empty room in her house so that they don’t have to be split up again.

Chris receives a phone call and rushes home, he finds Savanna waiting for him outside. They both got a phone call form his brother’s sponsor. Chris and Savannah head inside and Chris’s brother is drunk and dancing around with a girl named Wendy he met at the hardware store, he has painted the entire apartment green and red and is playing golf in the house. Savannah says that she is going to call the clinic to get him brought in on a psychiatric hold.