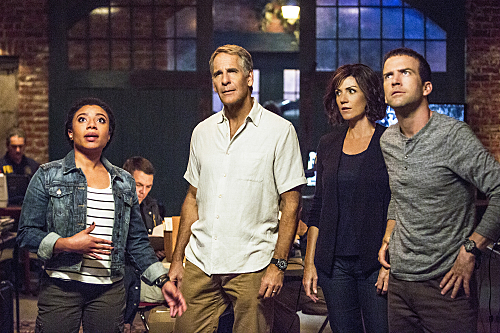 Tonight on CBS NCIS: New Orleans returns with an all new Tuesday September 22, season 2 premiere called, “Sic Semper Tyranis,” and we have your weekly recap below. On tonight’s episode, in the Season 2 premiere, a military convoy is bombed on a bridge

On the last episode after receiving intelligence that the ports had been breached, placing the Navy and the Gulf Coast in harm’s way, Pride and the NCIS team followed every angle to determine what had entered their city and how they can put a stop to the Broussard Syndicate, who seemed to always be one step ahead of them. Did you watch the last episode? If you missed it, we have a full and detailed recap right here for you.

On tonight’s episode as per the CBS synopsis, “after a military convoy is bombed on a New Orleans bridge, Pride and the team plan a dangerous undercover operation to retrieve a stolen missile and prevent an attack on a U.S. Naval ship.”

Tonight’s episode looks like it is going to be great and you won’t want to miss it, so be sure to tune in for our live coverage of CBS’s NCIS: New Orleans at 10:00 PM EST! While you wait for our recap hit the comments and let us know how excited you are about the season 2 premiere.

A simple military exercise was ruined when a disgruntled former Navy Officer decided to be part of a plan to set off an IED on a public bridge.

Naval Officer Mark Yaden had been dishonorably discharge from the Navy after he began to speak out against American involvement in overseas conflict. Apparently Yaden had claimed at the time that the Americans had no right and were thus continuously in the wrong. So naturally the Navy no longer felt he was needed and in essence fired him for his policies.

However, not long after he was discharged, Yaden disappeared off the grid for two years. There was just nothing on him until two months ago. Then the bombing happened and for someone who took great care to be miles away while he blew up a bridge – the mistake that pointed a finger right at him was the wrapper of a candy bar that he had left behind.

Yaden had been careful when he sent up a bomb but he had left fingerprints all over the wrapper. And so the NCIS unit knew who they were looking for. Yet bringing him proved to be a problem.

Yaden had noticed the heavy military presence in the quarter and the man that had killed two people knew he didn’t want to be taken in alive. So he killed himself. And right before he did, he said “Sic Semper Tyrannis”.

A quote infamously said by John Wilkes Booth on the night he assassinated Abraham Lincoln. It means “Thus Always Tyrants”. And when it was proven that Yaden liked to rock climb, they eventually led to the capture of his girlfriend Darla who also repeated that quote.

But Darla wasn’t ex-navy like Yaden. She was separatist as in she belonged to a group that believes in destroying signs of American aggression such as their military infrastructure. Only before the bridge, these people were known as outliers.

They generally could be found in the comment section on social media website. And no one took small groups seriously.

And then everything changed with the arrival of Brant Boudreau “The Father”. Brant sees himself as a modern day revolutionist and he brought all the separatist together to form one large militia. So the bridge was his idea. The men that died had been carrying a power missile launcher and getting rid of it was a great feat for them.

But that’s not where they wanted to end things and they didn’t take down a bridge merely to destroy a good missile.

Apparently they were going to use it for their upcoming a plan. Taking down a naval convoy was one thing but bringing down a naval ship was quite another. Thus, some would say they would need a missile in order to carry out such a large job.

And that’s why the separatist needed to up their recruitment for what was ahead. Because, like the Father said, if they could bring the government to its knees then the country could finally return to its traditional values.

Or so the Father claimed when he started to make videos that said the country lost its way and that it was time for “real” Americans to reclaim the land. And the way he said it was a bit like white supremacy wrapped in a prettier package. So Agent Plame, for one, could barely tolerate going through all the videos for signs of location. Yet he knew his part was imperative to taking these people down.

And if Pride could go in undercover then watching a couple of videos wasn’t that bad.

Agent Pride had been warned about this group but he said he was willing to risk whatever it takes, even if it was his life, to figure out the separatist endgame. And do you know what happened? Pride ended up finding out that the Father had been dead for months. Long before the recruitment videos even went out.

So thanks to both Plame and Pride, the NCIS were able to put an end to the militia training camp. But unfortunately they realized they weren’t working with separatist in the end. For it seems that Zed Hastings (an ex-servicemen) who was originally the Father’s second in command didn’t believe in reclaiming America when he killed his boss with the boss’s wife’s help.

They were just going to take down naval ship because the Chinese paid them to!

But the NCIS didn’t capture Zed and, later, it was revealed that he took picture of Pride and put a 50,000 price on the agent’s head.