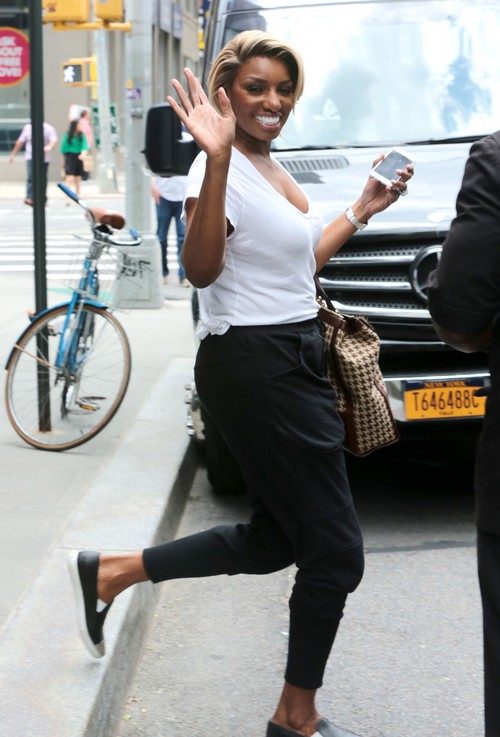 Since parting from The Real Housewives of Atlanta due to ‘contractual termination’ – or whatever they call greed nowadays – NeNe Leakes expanded her brand like John Travolta’s Speedo expanded at that all-male nudist beach in 1987. The boisterous Omarosa-esque reality television star allegedly left RHOA to continue on in the hopes of becoming America’s Next Top Bethenny Frankel. The latter turned out to have a little less conversation than Elvis Presley would have hoped for, but the winner doesn’t always take it all, now does she? Lucky Leakes spread her gangly ferocity and secured a gig as a game show host on ABC’s rebooted “To Tell The Truth”.

To tell you the truth, NeNe Leakes shouldn’t have peeved off Bravo’s high-and-mighty executives. These people can cancel a show, eat a puppy and destroy the world before breakfast. Add greed to the mix and you have the perfect recipe for a shanking scene straight out of Orange Is The New Black. According to TMZ, “NeNe Leakes and Kim Zolciak were thiiis close to reuniting on TV … but Bravo just scrapped their new show, ‘Road to Riches.’”

Or in layman’s terms, “I had NeNe Leakes for lunch.”

The show’s official press release reads like a Stephen King novel: “Atlanta’s ‘most driven’ housewives–NeNe Leakes and Kim Zolciak Biermann— drive out of their comfort zones and across the country to discover America on a one-of-a-kind adventure. The road to LA may be paved with good intentions, but that doesn’t mean they won’t occasionally drive each other crazy.”

According to an exclusive source for Celeb Dirty Laundry, “Yes, we’re going with the ‘scheduling conflict’ excuse for now. The truth of the matter is… Leakes made too many enemies when she quit RHOA. A fallout was to be anticipated. ‘Road To Riches’ was scrapped because Leakes wanted certain… How should I put this? She wanted certain contractual agreements in place before taking on the show [with Zolciak]. Unfortunately, people do not always buckle under the greedy pressure of reality television stars.”

The road less travelled doesn’t always make all the difference. In fact, Leakes’ road trip down Screw You Lane is one mile away from Three Mile Island, a nuclear-infested hell-hole with zombie trees and John Travolta’s used Speedos.

What do you think? Is NeNe Leakes to blame for the show’s cancellation? Let us know your thoughts in the comments below.