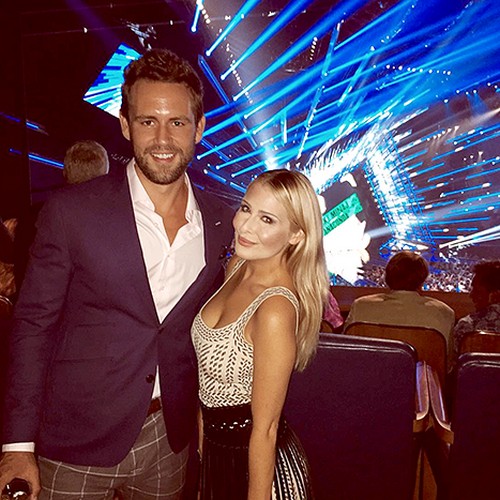 Is Nick Viall dating fellow Bachelor star Sadie Murray? It seems like just yesterday that Kaitlyn Bristowe was publicly dumping Nick Viall on the season finale of The Bachelorette after he got down on one knee and asked her to marry him, but Nick is totally over it. As a matter of fact, it looks like Shawn Booth’s nemesis couldn’t care less that he wasn’t the 2015 winner!

According to a new report from US Weekly, Nick and Sadie were canoodling up a storm at a VMA’s afterparty this weekend – and onlookers were certain that they were more than “just friends.” An eye witness dished to US Magazine, “Viall got extra cozy with Murray while dancing to J-Kwon’s “Tipsy” at the Republic Records bash. After dancing and singing together, the two kept close while sitting on a couch. It’s safe to say that Nick Viall is clearly over Kaitlyn Bristowe. They were all over each other.”

The next day when rumors began swirling that Nick Viall and Sadie Murray were a couple, Viall quickly shot down the rumors. He explained, “We met last night. I was just with her having fun. There wasn’t much more to it than that.” So, maybe Nick and Sadie aren’t dating quite yet – but that doesn’t mean that they couldn’t be soon. It’s about time Nick scored a girlfriend that didn’t dump him and get engaged to another man ten seconds later. Seriously, the poor guy deserves some love. And, for those of you who don’t remember Sadie Murray from Season 9 of The Bachelor – she was a total sweetheart!

What do you guys think? Would Nick and Sadie make a cute couple? Is it possible that they will begin dating after hitting it off so well at the Video Music Awards after-party? Let us know what you think in the comments below!