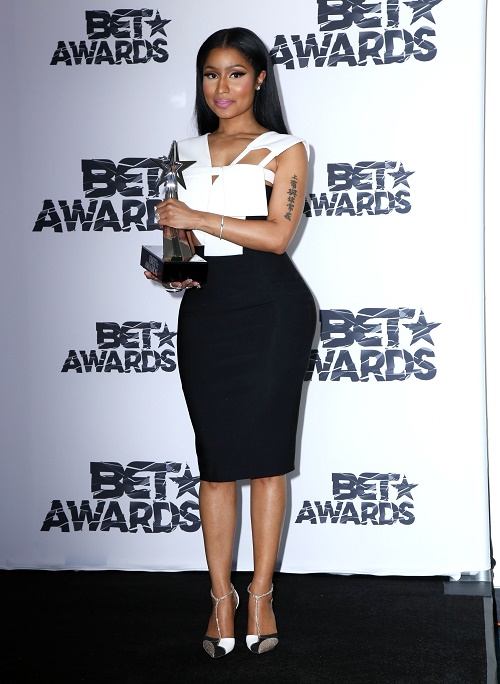 Nicki Minaj has been rumored to be pregnant by her boyfriend Meek Mill for weeks now, but considering the fact that she has stepped out multiple times without a baby bump since those rumors began circulating – it’s safe to say there isn’t a baby on the way. But that doesn’t mean that Meek Mill doesn’t want a baby. According to a new report, the rapper is determined to get Nicki Minaj pregnant.

Meek Mill sat down with Shade 45 for an exclusive interview, and obviously the rumors about his girlfriend Nicki Minaj being pregnant came up. Meek revealed that Nicki is not pregnant at this time, but he really wants her to be! Meek teased, “Nicki ain’t pregnant. But, yeah I WISH. I already tweeted that five years ago, so it should be happening later. Sooner or later. When we ready for that.”

Apparently, Nicki and Meek are not on the same page though. After Meek’s interview was published, Nicki took to Twitter to clear the air on whether or not she was getting pregnant any time soon. Nicki tweeted, “No matter what he or anyone else says, Onika Tanya Maraj [her real name] won’t be pushing anyone out of her vajayjay until she is married. Now check that.”

Ironically, Meek recently gave Nicki Minaj an engagement ring, but then the couple insisted it wasn’t an engagement ring, and then they were engaged again. Basically…we have no idea what is going on. But it sounds like Meek Mill is way more ready to settle down than his rapping girlfriend Nicki. Maybe he just gave her an engagement ring so that she would have a baby by him?

What do you guys think? Do you see a baby bump in Nicki Minaj’s future? Do you think she will stay true to her word and not have any children until she is married? Are they really engaged? Let us know what you think in the comments below!