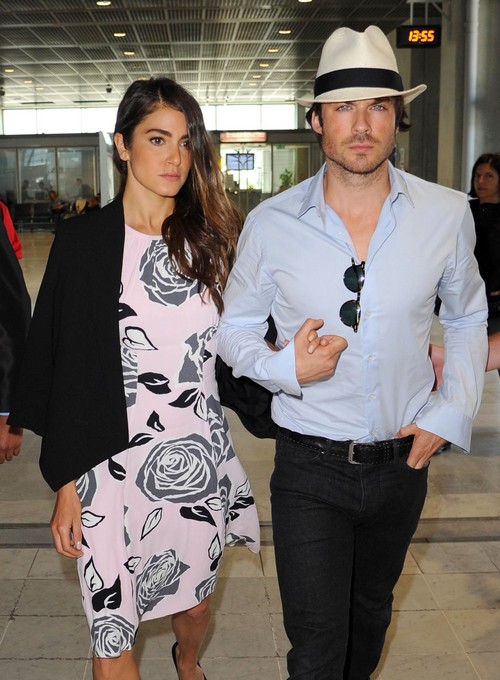 Nikki Reed is desperate to rid her husband from the stigma of Nina Dobrev, and has been urging Ian Somerhalder to quit ‘The Vampire Diaries.’ It’s a strong possibility Reed has been pushing Somerhalder toward a movie career to end the associations with his ex-girlfriend, which has fans hopeful Ian will take ‘Fifty Shades Darker’ role.

James Foley has taken on the job of directing the ‘Fifty Shades of Grey’ sequel, ‘Fifty Shades Darker.’ Casting rumors have be swirling with new characters that will be added to the saga, and there is a strong possibility Ian Somerhalder will take on the role of Jack Hyde. Henry Cavill was briefly speculated as being interested in taking the role, but the ‘Batman Vs. Superman’ star quickly debunked the rumors. Theo James is also said to be in the running for the role of Jack, but Ian’s fans are hopeful to see Somerhalder on the movie screen.

The TVD star’s fans aren’t the only ones who want Ian Somerhalder to get a movie career. Nikki Reed, playing the supportive wife, wants Ian to make a move to film and quit ‘The Vampire Diaries’ to end the constant association with Nina Dobrev. The costars dated for several years before Nina Dobrev dumped Ian. Nikki won’t forget that fact, and wants to distance her husband from TVD and the stigma of Dobrev. Until Ian moves on, Reed knows Somerhalder will always be seen as “Nina Dobrev’s ex” and not “Nikki Reed’s husband” in the public eye.

Ian hasn’t responded to the ‘Fifty Shades Darker’ casting rumor, but the role would ensure at least 2 films for Somerhalder’s resume. The part of Jack Hyde will continue onto to the third installment of the series with ‘Fifty Shades Freed.’ It would also be a huge step away from the TVD world…and Nina, who has been actively pursuing a movie career with no current success.