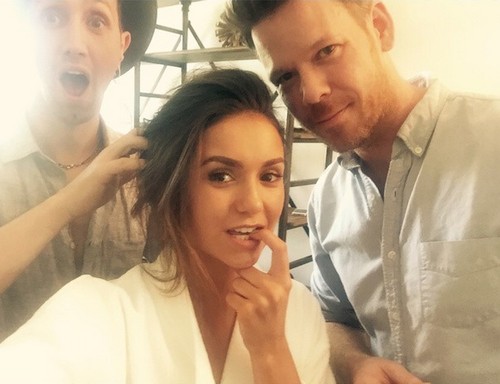 Does Nina Dobrev know secrets that assure The Vampire Diaries star that Ian Somerhalder and Nikki Reed won’t get married? Ian Somerhalder and Nikki Reed still haven’t set a wedding date, despite the fact that they’ve been engaged for a few months now. They were in such a rush to get engaged, you’d think that they would have been in a similar rush to get married, no? But alas, that’s not the case.

In fact, we’re hearing that many insiders and people close to Ian and Nikki – including, not-so-coincidentally, Nina Dobrev – don’t believe that Ian and Nikki will even get married. Our sources tell us that when Ian and Nina were still together, that Ian might have pointed out that Nikki was slightly boring and didn’t have the ‘it’ factor that makes a movie star, the same ‘it’ factor that Nina Dobrev has in spades. Of course, Nina is far too classy to leak that information to the public, but that’s because thus far, Nikki and Ian are playing ball. But the minute they say anything negative about Nina, or try to make her life difficult? Well, she won’t be as classy…

Even then, the chances of Ian Somerhalder and Nikki Reed carrying this marriage through are seeming less and less likely as time goes by. It seems like their engagement was largely for PR purposes, but the proposal did its job and got them an increase in publicity. But they’ve dilly-dallied so much on the actual getting married part of the engagement, it seems like they’ve both either developed cold feet or are trying to set a world record for longest engagement in Hollywood.

What do you guys think about Ian Somerhalder’s and Nikki Reed’s never-ending engagement? Do you think they will or won’t get married, a.k.a. do you agree or disagree with Nina Dobrev? Or will they just stay engaged, and eventually break up? Let us know your thoughts in the comments below.