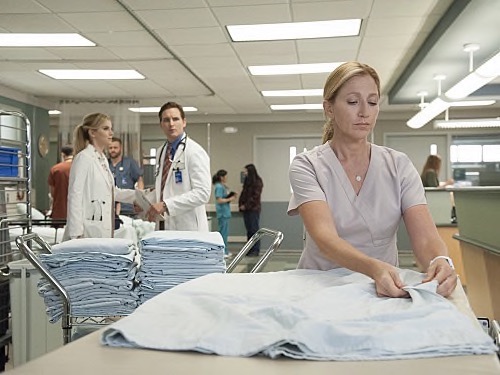 Tonight on Showtime the twisted and darkly funny Nurse Jackie is back with an all new Sunday season 7 episode 2 called, “Deal.” On tonight’s episode Jackie [Edie Falco] sets her sights on returning to All Saints, with help from her lawyer, but she can’t afford his retainer.

On last week’s episode picking up with her arrest, Jackie suffers through detox. Season premiere. Did you watch the last episode? If you missed it we have full and detailed recap, right here for you.

On tonight’s episode per say the Showtime synopsis “Jackie sets her sights on returning to All Saints, with help from her lawyer, but she can’t afford his retainer. Strapped for cash, she gets inventive and turns to old habits for a solution. Meanwhile, Zoey struggles with the news that Jackie might be coming back to the ER.”

Tonight’s premiere episode looks like it is going to be great and you won’t want to miss it, so be sure to tune in for our coverage of Showtime’s Nurse Jackie tonight. While you wait for our recap hit the comments and enjoy the sneak peek of tonight’s tonight’s episode below.

#NurseJackie starts with Jackie showing up at All Saints with coffee in hand. She waves at Zoey and says she brought her caffeine and says she’s 16 days clean. Zoey says she’s on the security watch list but Jackie says she has a lawyer who’s a shark. Barry the lawyer calls and says he’s not coming since her check didn’t clear and says until she pays the retainer, they’re done. He hangs up on her.

Jakcie goes to try and pawn a stack of stuff. She gets a grand total of $1500. The woman grabs her hands and prays over her. Jackie sasses her and leaves. At work, the replacement nurse tells Zoey she can’t work Saturday because a dead arm was found in her apartment trash. Thor says he and his honey have tickets to Kinky Boots. Gloria over hears them talking about Jackie and they hush up.

Gloria taps Zoey on the shoulder and they go to talk. Gloria says there’s no lawyer or HR meeting and has no clue what Jackie meant. She asks Zoey if she’s sad Jackie’s not coming back but Zoey says she can’t be. Gloria says that behavior is why Jackie can’t be there and says she’ll make sure she never touches a patient again. We see Jackie working as a home nurse to an older woman.

She asks Jackie to get her lunch and she goes to the kitchen and spots an arsenal of pills. She makes a call to Eddie and asks if he can help her. She reads off the labels to him. Jackie tells the patient’s mom that it’s going great and then asks for a pay advance. The woman says she won’t need her and is putting her in a nursing woman. Jackie says it may be the meds that are causing problems.

The woman says her mom needs the drugs to keep her calm, but Jackie says she’s sedated. Coop asks Carrie to look at houses this weekend but she doesn’t like the neighborhood he’s picked out. She’s sewing up a guy and he’s brought her x-rays and he says he doesn’t want her in or near radiology. Zoey smiles and says they need some good news but they ask her to keep it secret.

Coop makes a jail joke about Jackie but Zoey says it’s too soon and says jail is one way to meet men in New York. They wonder if the jail has LinkedIn or LockedIn. Then Thor sings a Les Mis song about Jackie. Carrie tells them to stop before she pees. Eddie comes in and calls them assholes and says Jackie never did anything to any of them. Thor sings that he feels bad and they giggle.

Jackie swaps out the older woman’s meds with candy substitutes. She then takes the other pills with her in a baggy. Next day, the woman is sitting up looking much perkier. Jackie watches her patient as she takes the little candies instead of all the drugs they had her zonked out on and looks satisfied. At home, Jackie pulls out the bag of drugs and tucks them behind some books on a shelf.

She finds some more silver things to take to the pawn shop and then sits looking depressed. She looks around the house. Next day, she goes to the bank about taking out a second mortgage but the lender says there’s no equity. He shows her some papers. Jackie goes to find Kevin and asks why he took out extra mortgages without her permission and says that’s forgery. She asks if that was Mia’s signature.

He says it was for expenses for the girls and she says $150k is a lot for jeans and tells him she needs $10k now but Kevin says he doesn’t have it and the money is all gone. She spots a nice watch on his wrist. He says there was a renovation at the bar and says they needed a bigger apartment and paid for the wedding. She says she was kicked out of a wedding she paid for and tells him this is over.

She says wants the title to the Jeep to sell it and says she wants the watch too. She heads back to the pawn shop where she’s prayed over again. She tells him she gets reasonable visitation starting now. Gloria comes to see Eddie and asks about all the pills Jackie got arrested with and she says she wants a complete inventory of the pharmacy. She says she wants a capsule trail and Eddie agrees easily.

Gloria says she’s the wrong person for him to fuck with and he says it’s no problem and he’ll get right on it. Jackie takes the Jeep to a guy and she wants $2,200 then Eddie shows up and asks about it and says $2,200 is the price. Then he asks if she’ll take $2,000. She says $2,100 and he asks if he can drive it away now. The other guy freaks and writes the check. Eddie offers to help her.

He says he has one record worth $5k alone. He kisses her and says she’s stubborn. Jackie adds up all her money and is still short. She heads to the park the next day to meet one of her druggie pals. She says she needs money for her lawyer and has no one else to sell to. She says she took them from an old lady she works for and offers him the bag. He offers her his churro and she sees cash in the bag.

Jackie asks him not to sell them to kids. He gives his word and she says if you can’t trust a drug dealer, who can you. The girls get dropped off to Jackie. She’s thrilled to see Grace and Fiona. Grace asks if she’s going back to the hospital but Jackie says she’s clean and is working hard to say that way. Fiona asks about jail and if you have to poop in front of everyone.

Jackie shows up to work and the woman asks what she did to her mother. Sure enough, her mother is up, dressed nice and says she’s going to church. Jackie smiles with great satisfaction and goes with them to church. The daughter complains that she shouldn’t be doing this but her mom says to shut the f-k up. Even when she’s bad, Jackie gets results…

The woman heads inside and all her friends are thrilled to see her. She’s so happy to be back to herself. Jackie and her lawyer head to All Saints for the meeting with HR. Gloria is not happy to see them when they get on the elevator with her. They ride up in stony silence. Barry says Jackie was treated shoddily and says they have made huge transgressions against her including hearsay and no evidence of drug use.

He says Gloria abused her and terminated her improperly. Barry says he will go for a jury trial and pursue punitive damages. He calls her a mistreated caregiver. She gets her job back and Gloria tells her that her nursing license is suspended for now and this won’t be easy. She tells her to lose the blue scrubs and tells her to wear orderly beige and says she’ll be drug tested daily.

Zoey tells Jackie that she’s right and made it back. Gloria says there will be a monitor with her at all time and says she can’t touch patients, administer medications and will have a 2/3 cut in pay. Jackie says it’s a deal.