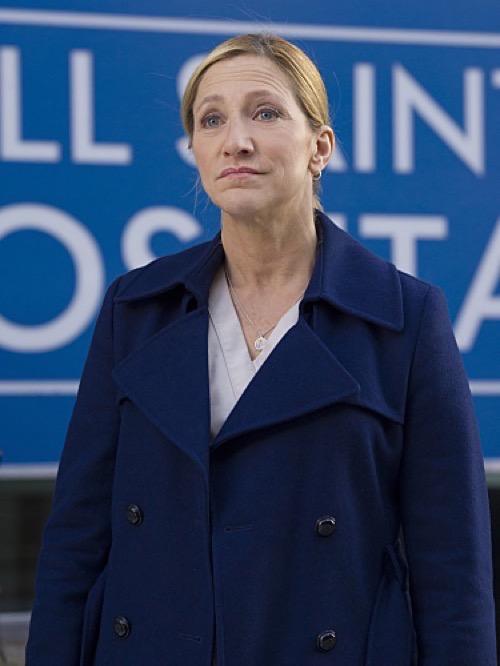 Tonight on Showtime the twisted and darkly funny NURSE JACKIE is back with an all new Sunday May 17 season 7 episode 6 called, “High Noon.” On tonight’s episode Jackie, [Edie Falco] Dr. Prince and Akalitus [Anna Deavere Smith] are forced to run the ER without nurses when Zoey leads a walkout to protest the hospital closing.

On last week’s episode Jackie stirs up trouble when she rallied her co-workers against the developers, but an attractive offer challenges her allegiance. Meanwhile, Coop prepared for his last day at All Saints, and his replacement arrived and surprised everyone with his carpe diem attitude. Did you watch the last episode? If you missed it we have full and detailed recap, right here for you.

On tonight’s episode per say the Showtime synopsis “Jackie, Dr. Prince and Akalitus are forced to run the ER without nurses when Zoey leads a walkout to protest the hospital closing. Meanwhile, Jackie battles her cravings when she treats a heroin addict.”

#NurseJackie begins with her waking from a pill dream. She finds Bernie in the ER hungover when she comes to work hours early. He asks if it was a rough morning and she says every morning is rough. He says she can use a boost and they do IVs of fluids. He calls her a jailbird then asks what was her poison. He says he never got into pills because they’re too clean. She says that’s what she likes about them.

She says she had a craving dream then woke up and still had cravings. He asks how she deals with it and she says she comes here. She gets a call from Eddie to check on her. She says she had a bad dream and came to work early. He says next time to wake him up early and asks if she saw the Times. The NYT ran an explosive story about the hospital being shut down for condos.

Zoey yells at one of the developers and Jackie says he’s just one guy and Zoey says the old Jackie would have fought this. Thor asks mom and dad to stop fighting. Zoey is ready to pick up the protest mantle but Gloria says to focus on work. Jackie lurks and catches the developer’s eye. He says he heard her speech and says it must be hard for her to change her public opinion.

She mentions the article – he says someone leaked a confidential presentation but says they got ahead of the backlash by accelerating the deal. She asks about her license and he says he’s working on it. He says these next few days must go smoothly and says to try and get Zoey to calm down for both their sakes. Thor is nearby and Jackie asks him wasn’t he the union rep. He asks about her secret conversation.

She lies and says the guy wanted a lunch recommendation but he doesn’t believe her. Jackie says the guy is helping her get her license back and asks him to keep this on the down low. He says he’s the union rep and she says the union can make a lot more noise than Zoey alone. Thor goes and tells Zoey that he’s her union rep. He says if she wants to fight, she has his support. She asks about a hunger strike and he’s diabetic and she asks about a regular strike.

Carrie comes in and freaks because they’re working on an icky foot. She’s queasy. Zoey asks what doctors would do without them then she has an idea. She tells him to imagine the press coverage. She tells Thor they should do it now. She says the ER is weirdly quiet. She talks about the French Revolution. She says she’s walking and tells Jackie to call her if it gets busy. Zoey says nurses are walking out over this unjust condo deal. She and Thor go.

All the others follows them. Jackie gives a little smile. Gloria walks in panicking and Jackie says it’s a walk out. Gloria says an ER of only doctors – god help them all. Someone wheels a guy in stuck in a grocery cart. Gloria still doesn’t want Jackie touching patients. They need meds and Jackie goes running because the doctors don’t know where it is. Jackie runs out to the ambulance and grabs some. She tells Bernie how to administer it and he does. The junkie comes back to life.

Then he gets up and runs out. Bernie says she saved his life but Jackie tells Gloria she didn’t touch him. Outside, Zoey gets up on a box and speaks to the other nurses. She says to save their patients, they have to first save the hospital. Zoey says they need to stir up community action. They decide to post on social media. Zoey tries to start a chant and it’s awkward. One guy yells out – f-k Norway. Carrie is clueless and can’t find supplies. Jackie is helping.

Bernie is trying to start an IV but can’t seem to do it. He tells Gloria they need a better strategy. Bernie says he needs hands now. Carrie comes in with a guy from an elevator shaft. Jackie offers to help Gloria who’s trying to run an IV. Gloria ignores her. Jackie pops gloves on and runs to help Bernie. She hands things to Bernie but doesn’t touch the patient. Bernie takes a selfie of him with Jackie and Carrie to commemorate.

The drug dealer calls out to Jackie and calls her the bitch who saved him and says he’s cold. He’s cuffed to the bed and she says if he runs, they’ll sedate him and put him through forced detox. She says she’s been through it and he says he’ll be cool. Then he asks why she saved him. She says it’s her job but he says he’ll just use again. Jackie says right now he’s with her and alive. She says he looks good in yellow and to keep the shirt then she restrains him again.

Jackie calls to cancel plans with the kids. Grace accidentally forgets to hang up the phone and Jackie hears Fiona saying she really wanted to see mom. Grace tells Fiona that she needs to get used to it and says their mom is unreliable but Fiona still has her. She tells her she’ll always be there. Fiona says maybe she’ll get better but Grace says she won’t and it’s part of her sickness. Jackie ends the call and Bernie asks if she’s okay. She steps outside to get some air.

Zoey comes over and asks if everything is okay. Zoey says no one cares that they walked out. Jackie offers some help and says she agrees with what they’re doing. Jackie makes a call as Zoey starts a chant. She’s put on hold. Carrie comes back with CAT scan results from the elevator guy. Carrie says she’s going to cancel her date and says it feels too soon but Bernie says to get back on the horse and date like you’re afraid to die alone. He says he’s four times divorced.

She says he’s an expert and a cautionary tale. Gloria says the temps are coming in 10 minutes. Some cop cars roll up followed by the press. One of the cops asks who’s in charge and says to disperse. Zoey grabs the bullhorn and climbs on a cop car. She starts to chant “Save Our Saints.” The cop threatens to arrest her. Zoey is arrested and keeps chanting as the TV cameras roll. Thor steals the bullhorn and quote Norma Rae. He’s also arrested.

He gets a call and says the unions has their backs and will provide lawyers. They all start chanting and all the nurses are arrested. Gloria says she’s surprised that Jackie isn’t out there and she says the same to Gloria. Gloria joins the protest since the temps are there and tells Zoey she can’t let her staff go to jail without her. The Norwegian sees Jackie standing alone and glares at her. The junkie in the yellow shirt runs by and Jackie follows him.

She sees him go straight to buy some drugs. She walks over just as he snorts it. She hands another junkie the medicine to revive him then hands over some spares. One offers Jackie a line of drugs and she’s sorely tempted but struggles hard to walk away. She calls Grace back and asks if she can talk. She says she knows she can be flaky and even she doesn’t know what will happen next. She says it must be scary for her. She looks back at the junkies sniffing away.