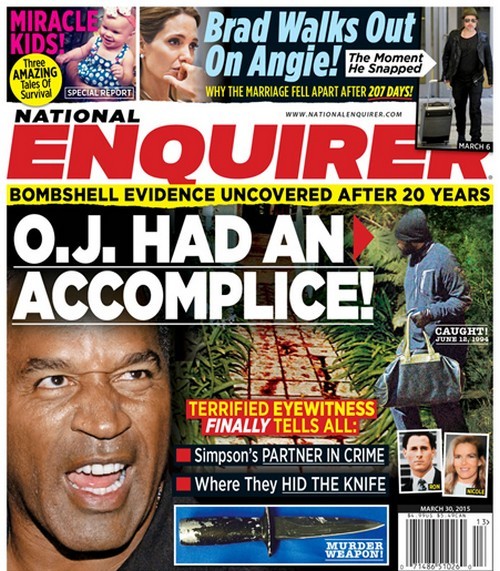 The O.J. Simpson murder scandal is seemingly one that never ends, at least according to the National Enquirer. The latest cover issue of the National Enquirer claims that twenty years after O.J. Simpson allegedly murdered Nicole Brown Simpson and Ron Goldman, new evidence has come to light that suggests that O.J. had an accomplice. This might also explain why O.J.’s lawyer was able to argue his case so efficiently, thereby getting him off in the ‘trial of the century’ despite all the evidence pointing to O.J. as the murderer.

The Enquirer’s source claims that none other than O.J.’s son, Jason Simpson, was his accomplice. Apparently, Los Angeles private investigator Michael Alexander Martin has stumbled upon evidence that proves that the then 24-year-old Jason was at the scene of the crime, and Michael also claims that he has new evidence that would blow the 20-year-old case wide open. He even tells the Enquirer, “It has been a long journey in finding the courage to come forward to the world with all that I witnessed that night. I will now not stop until justice is given to Nicole and Ronald.”

And how exactly did this Michael Alexander Martin happen to stumble upon this very crucial information? According to him, he was parked in an unrelated stakeout near Nicole’s home, and he saw both O.J. Simpson and his son Jason get out of a car in an alley behind Nicole’s home, followed by O.J. putting on a pair of gloves. Ten minutes later, O.J. supposedly returned with a bundle of clothes under one shoulder, which we assume to be the bloodied clothes from the murder.

Of course, the real question is why this Michael waited for so long to come out with the truth, if he’s known about this for twenty years. This isn’t the type of information you’d keep hidden, especially not when O.J. Simpson ended up getting off on mere technicalities and a LACK of witnesses!

In addition to the cover story, the National Enquirer also has a feature on Brad Pitt walking out on Angelina Jolie, and why their marriage is ending after only 207 days. A.K.A. Welcome to Part 2,345,678 of the Brad Pitt and Angelina Jolie non-existent divorce saga.