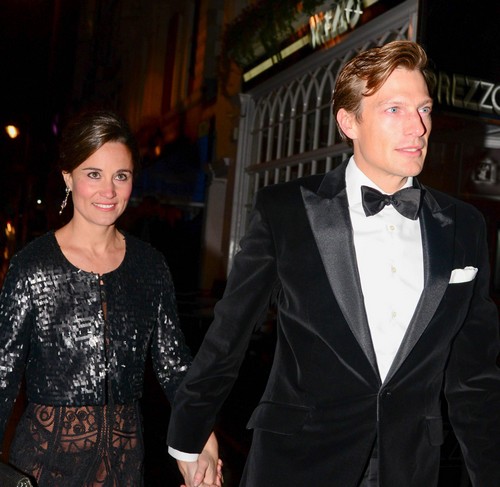 Pippa Middleton split with boyfriend Nico Jackson and it’s because the Royal family can’t stand him – they absolutely refuse to accept Nico as Kate Middelton’s brother-in-law. Did Carole Middleton do some behind the scenes dealing with Queen Elizabeth and agree that now Pippa needs Royal approval of the man she marries – is Pippa the sacrificial lamb for Carole’s appeasement of the Queen?

If Pippa ever has any hope of having a husband and family she needs to toe the Royal line – dating and marrying whomever Queen Elizabeth approves. Kate Middleton would love to see her sister married to Prince Harry but it’s impossible that her majesty is going to allow another Middleton sister into the inner circle of the Royal family.

Sources claimed Nico Jackson and Pippa Middleton decided to part ways because geographically their relationship wasn’t working out – he recently moved to Switzerland. In late September Pippa and Nico looked very much in love while out on the town in London. There were rumors that the lovebirds were getting ready to announce their engagement and set a wedding date.

Now it all seems to have come to a screeching halt. Is it just a coincidence that was right around the time Kate Middleton went back to work after shirking her Royal responsibilities all summer long? And also about the time Carole Middleton regained some access the Duchess of Cambridge and grandkids Prince George and Princess Charlotte?

Who is on Queen Elizabeth’s list of approved suitors for Pippa Middleton? Looks like former flame James Matthews may be in the running. He joined Pippa, her mother Carole and her brother James Middleton while they were on vacation in St. Barths recently – he dated Pippa briefly in 2012 before she hooked up with Nico Jackson. And former fiancé – the former cricket player turned financier Alex Louden is rumored to be back in Pippa’s life. If old beaus are being recycled maybe they’re on Queen Elizabeth’s list of acceptable suitors.

Has the far-reaching arm of the Royal family finally reached as far choosing Pippa’s husband for her? Or is this just the end of a relationship for a couple who couldn’t make commuting between Britain and Switzerland work?

Why wouldn’t Pippa and Nico just get engaged and then have Nico move to Switzerland? It wouldn’t come as any surprise if Carole Middleton traded in her Pippa’s happiness in order to worm her way back into Queen Elizabeth’s good graces.

Come back to CDL for all your Royal news, rumors and gossip!