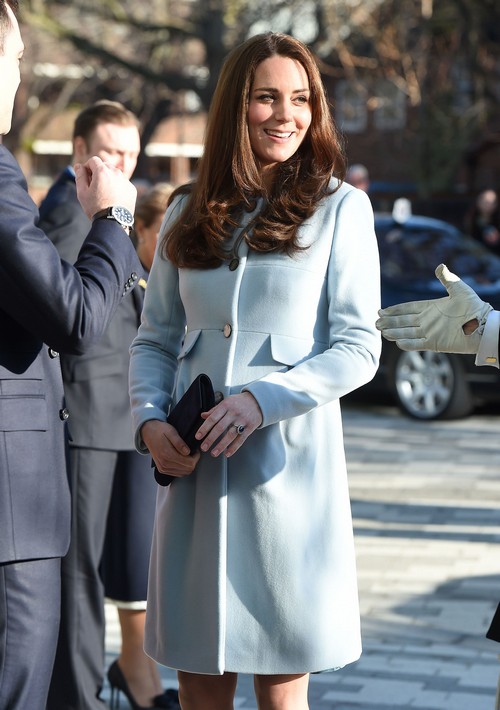 Kate Middleton made an appearance at a special hospital school for children afflicted with mental health problems on Monday, February 10, just after returning from Mustique. Kate Middleton and Prince William were conspicuously absent from the BAFTA pre-party held last weekend at Kensington Palace, but it turns out that they had just extended their vacation in Mustique for a few days. However, the entire royal family – including, Prince George – were photographed boarding a plane back to London the other day, and Kate and William are back in town and making public appearances before they even got the opportunity to rest and recuperate.

To be fair, they were just on vacation, but knowing these two, that in itself is exhausting. Plus, Kate Middleton is in her third trimester of pregnancy, so she’s likely hormonal and tired to begin with. Despite that, a very pregnant Kate Middleton was forced to make an appearance at a hospital school for children suffering from mental health issues. In other words, the royal family’s still using Kate as their pawn to distract the public from the ongoing Prince Andrew sex scandal. And the sad part is? It’s actually working.

Most of the media is focused on how pregnant Kate Middleton is, or how long the royals’ vacation in Mustique was – not how guilty Prince Andrew is, or whether the royal family actually covered this up. I mean, there’s no denying the royals knew about Andrew’s underage sex scandal, and that’s partly why the royals’ PR is down the sinkhole right now. But alas, they have Kate Middleton to fix it, and they even trotted out Prince George for a little glimpse to satisfy the public.

Eventually, Kate might get tired and refuse to make any more public appearances, but for now, she’s going to have to suck it up and go put a smile for the cameras – which she has been doing, to her credit.

What do you guys think about Kate Middleton’s never-ending public appearances, despite her ever-growing baby bump? Is it hindering or helping the royals’ efforts to distract the public from the recent scandals? Let us know your thoughts in the comments below.