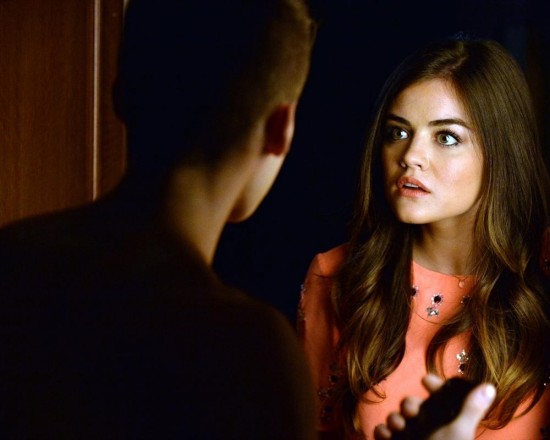 Pretty Little Liars returns to ABC Family tonight with an all new Tuesday February 10, season 5 episode 19 called “Out Damned Spot,” and we have your weekly recap below. On tonight’s episode, Aria [Lucy Hale] seeks tutoring help from Andrew to improve her grades. Meanwhile, Spencer [Troian Bellisario] assists Jonny with a project; Hanna [Ashley Benson] asks her father for financial assistance with college; and Mike’s behavior at the school blood drive troubles the girls.

On the last episode, Aria, Emily, Hanna and Spencer had been burned before by newcomers to Rosewood, so it was no surprise the four ladies were wary when someone new crossed their path. Spencer let down her guard a bit as she spent more time with Jonny, and Emily continued to try and figure out Talia as she kept getting mixed signals from her co-workers. When Mona’s friend Lesli showed up in town, Hanna was tasked to get her back story and find out if Lesli was really who she said she is. Were the girls wise to keep an eye on everyone, or can they allow a bit of comfort room without worrying it is an “A” trap? Did you watch last week’s episode? If you missed it we have a full and detailed recap right here for you.

On tonight’s episode as per the ABC Family synopsis, “senior high school students focus on their future college careers and feel the high pressures that come along with it, and Aria, Emily, Hanna and Spencer are no different. With a grade contingent acceptance, Aria needs to buckle down to improve her grades and looks to Andrew for some tutoring help. Also having college acceptance anxiety, Spencer decides to take a break and help Jonny with a new project. Hanna is doing just fine on her college acceptances but finds out that she has been turned down for financial aid and turns to her dad to help. Meanwhile, Aria and the girls concerns about Mike increase after an incident at the school blood drive.”

The nineteenth episode of season five’s PRETTY LITTLE LIARS is going to be really exciting and we’ll be recapping it for you right here. While you wait for the recap, check out a sneak peek of tonight’s episode below!

Tonight’s episode of Pretty Little Liars kicks off with the liars in school. Aria heads to class and has not studied for her test, she begins copying off the kid in front of her. Hanna corners Spencer and needs help with college – she got accepted in several schools, but none of them are offering her financial aid. Spencer goes through the paperwork and explains to her that the reason she was denied is because of her dad’s income. After class, Andrew corners Aria and demands to know why she was copying off from him – he isn’t mad but he offers to tutor her.

Emily goes for a bike ride with Talia, they head out in the woods and Talia takes her to the spot where she had her first kiss in 4th grade. They sit down and chat, and Talia asks Emily what her “biggest fear is.” Emily leans in and kisses Talia, and doesn’t answer her question.

Hanna heads home and finds her mom sitting in the dark drinking wine, she tells Hanna that she finally talked to Ted. And, she told him the truth about sleeping with Jason DiLaurentis – Ted told her that he needed some time to think and he would call her later. Ashley cries to Hanna that Ted “couldn’t even look at her.”

After school Spencer calls Aria – she is convinced that her brother Mike is “A” and is working with Ali. Aria reassures her that she will keep an eye out on him, but she doesn’t think that her brother is “A.” Spencer gets off the phone, and her neighbor Johnny is in her kitchen raiding her refrigerator. He says that he is painting a mural at Hollis, and he invites her to tag along and help him. Spencer has to work on getting in to college, but he persuades her with a dinner. Aria hears her brother’s phone ringing and answers it, it is a collect call from Alison in prison, she says “Hank Mahoney” and hangs up.

Spencer and Johnny head to Hollis after hours to paint the mural in the dark. They chat and get to know each other, and Johnny tells her about his ex-girlfriend. Meanwhile at Hanna’s house she bickers with her mother over financial aid, Ashley says that calling her dad and asking for help is not an option. Aria storms in to Mike’s room and demands to know why he has been talking to Alison and who Hank Mahoney is. Mike refuses to answer her questions and informs her it is none of her business. At the coffee shop Emily notices Talias file in Ezra’s stack of payroll – she is shocked when she learns that Talia is married and listed her husband as an emergency contact.

Mike logs in to his computer and messages someone named Hank Mahoney, he says that Alison told him what to bring and they need to meet up tomorrow. Mike’s opens the mini refrigerator in his room and opens a decoy can of protein shake – inside it is a vile of blood.

The next day Spencer is furious when she sees the newspaper, and realizes that the mural she helped Johnny paint was illegal – it was actually vandalism and he didn’t have permission to be there. She screams at him that she was arrested for murder and she can’t get in trouble again and storms off. Aria sits down with Andrew for her tutoring session, Hanna keeps texting her and interrupting and asking about Mike – Andrew says that “someone is worried about her brother.”

At work Talia flirts with Emily and tries to get her to try some food she has been cooking, Emily freaks out on her and demands to know when she was going to tell her that she was married. Ezra hears them screaming and rushes inside. Emily storms out of the coffee shop, and sees Mike at the ATM taking out a ton of money. She grabs the receipt after he leaves and realizes that whatever account he is taking money out of has over $20,000.

Emily rushes to Aria’s house and tells her about Mike, they hear Mike take the car and they beg Andrew to take his car so they can follow him. Andrew’s car is standard and they don’t know how to drive stick, so Andrew agrees to drive them – they follow Mike to a hole in the wall bar. They rush inside and thank Andrew for the ride, they are shocked to see Mike is meeting with Cyrus (Ali’s fank kidnapper), but he introduces himself to Mike as Hank. Hanna heads to her Dad’s office and tell him about her college money situation – her Dad informs her that he can’t afford to pay her tuition because he is paying his step-daughter’s college tuition.

While Emily, Spencer, and Aria are standing outside of the bar they receive a text message from “A,” it says “Thanks for the get in jail free card,” and has a picture of their vials of blood. Syrus comes outside and sees the liars, he chases them and corners them up against a dumpster with his motorcycle. Andrew apparently didn’t leave and he appears with a baseball bat and scares off Syrus.

Aria and Spencer head back to Spencer’s house and they find Johnny stocking her refridgerator, he apologizes and she explains why college is important to her. Emily heads to Talia’s house and they discuss their relationship, she explains that her husband knows she is in to girls, but she hasn’t left him because they are best friends now. She apologizes to lying for Emily, and Emily explains that there are things that she isn’t ready to share with her either.

Hanna heads to Spencer’s house and they have a meeting, they fill her in on the blood samples that Mike gave to Syrus at the bar. They know it is only a matter of time before “A” uses their blood to plant somewhere and get them arrested. Spencer heads downstairs to the kitchen – she has no idea Mike is watching her form outside of the window.