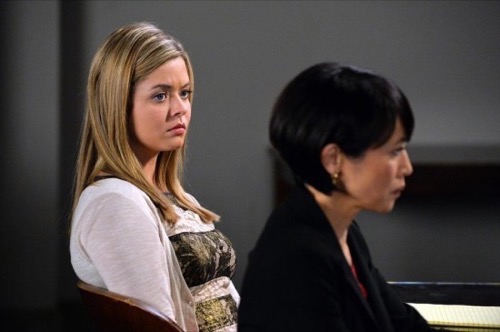 Pretty Little Liars returns to ABC Family tonight with an all new Tuesday March 17, season 5 episode 24 called “I’m a Good Girl, I Am,” and we have your recap below. On tonight’s episode, an unexpected witness shows up and rattles the girls as Alison’s [Sasha Pieterse] trial draws to a close. Meanwhile, Mike might have to testify, and Ezra [Ian Harding] and Caleb [Tyler Blackburn] clash over how he should handle the situation.

On the last episode, Alison’s trial went underway and her confidence was rattled as lies were exposed. Meanwhile, Hanna’s friends tried to free her by investigating clues left by either Mona or “A.” Did you watch last week’s episode? If you missed it, we have a full and detailed recap right here for you.

On tonight’s episode as per the ABC Family synopsis, “Alison’s trial gets underway and her confidence is rattled as lies are exposed. Meanwhile, Hanna’s friends try to free her by investigating clues left by either Mona or “A.”

The twenty fourth episode of season five’s PRETTY LITTLE LIARS is going to be really exciting and we’ll be recapping it for you right here.

Tonight’s episode of Pretty Little Liars kicks off with a news report on Alison’s murder case – the prosecution has just announced a surprise witness. Meanwhile in court the surprise witness takes the stand – it’s Mona’s friend from camp, Leslie Stone. The liars watch in shock as she is sworn in and takes the witness stand. Leslie testifies that she and Mona talked on the phone every day – and two weeks before Thanksgiving she told Leslie that Alison has threatened her and told her that if she didn’t keep her mouth shut she would “wind up eating worms.” Leslie adds that she thinks Alison’s friends were lying for her and Hanna Marin helped Alison kill Mona.

Spencer rushes out of the courtroom to call Caleb and warn him that Leslie just threw Hanna under the bus in court. She runs in to Toby in the hallway and demands to know why he hasn’t called her after Hanna was arrested. While she is telling him about her trip to London – Emily rushes out and tells her to get back in there, Leslie’s testimony is getting worse.

After court, Emily, Spencer, and Aria have a conference call with Alison and Hanna in court. They are running out of time – Alison is about to get convicted of murder and the Varjack trail went cold. Alison says there is one more possible way to get her off, she might have an alibi. When Mona was killed she was sitting at the park waiting to meet Cyrus and she heard someone in the park and saw their jacket. If the liars can find that person – they will be able to prove that she didn’t kill Mona.

Aria warns her brother Mike that he could get called to testify at Mona’s – she warns him that he has to keep his mouth shut about “A.” He snaps that he is done lying and keeping secrets. Later that night a package arrives at Aria and Mike’s house. Mike opens the box and finds a huge animal’s tongue in formaldehyde. Aria freaks out and tells him that it is from “A” and a warning about him blabbing in court.

Spencer and Emily head to the park that Alison told them about – they run in to a church group that is cleaning up the trash. The guy in charge, Matt Buckler, says that he has never seen any one else at the park besides himself. He does invite them to a dinner for the homeless that his youth group is putting on.

Aria asks Ezra to sneak Mike out of Rosewood for a few days to get him away from “A” and the trial, he reluctantly agrees. At school the next day Andrew follows Aria around, his feelings are hurt that she asked Ezra for help with her brother mike. Aria reassures him that she and Ezra are over – they just have a lot of history and Mike trusts him.

Spencer and Emily head to school, they see a girl from the youth group wearing the jacket that Alison described to them – she was the person at the park the day that Alison was there. Emily and Spencer try to talk to the girl and she freaks out – she sees Aria’s mom Ella in the hallway and snaps at her and accuses her of telling Aria and her friends a secret she promised to keep before she storms off. Emily and Spencer are baffled.

At home that night Aria confronts her mom and demands to know what the girl told her about the park. Ella confesses that the girl, Kendra, told her she went to a party and experimented with drugs. She got so high that she slept in the park to sober up because she didn’t want her parents to know – according to Ella she never said whether or not she seen Alison or anyone else in the park.

At Spencer’s house she and Emily are trying to figure out how to get Kendra to talk to them. While they are brainstorming there is a knock at Spencer’s door – it’s Kendra. She tells Spencer and Em that they need to talk and she got her address from Aria’s mom Ella. Meanwhile in prison Alison and Hanna are in the laundryroom – and they are trying to talk about the girl in the park. The guards won’t give them a second alone so Hanna slams her hand in the dryer and Alison burns herself with an iron so that they can go to the infirmary together.

Alison’s lawyer visits her in the infirmary and lectures her about trying to manipulate the system and then she heads to Spencer’s house to meet Kendra. She tells Alison’s lawyer that she was hiding in the pipe and she heard Alison on the phone and then leave and get in a car. Alison’s lawyer tells Kendra that she can go home and thanks her for her time – she tells Emily and Spencer that she isn’t putting Kendra on the stand and she is a useless witness because she was on drugs.

Ezra and Mike arrive at the cabin – and Caleb is there waiting for them. He tells Ezra that he is taking Mike back home to testify, Alison and Hanna need him to clear their names and tell the truth about Mona. While Ezra and Caleb are arguing over whether Mike should go back home and testify or stay at the cabin, he slips out the door. They hear a car drive off and Ezra and Caleb head outside, Mike is gone. They head in to the woods to look for him, and someone begins shooting at them with a bow and arrow. Ezra and Caleb are able to get away. A few minutes later Mike stumbles out of the woods – while he is looking around someone in a black hoodie attacks him and sprays his eyes with pepper spray. Ezra and Caleb make their way out of the woods and they find Mike tied to a tree with duct tape over his mouth. Caleb snaps a picture for evidence before they untie him and help him down.

Toby visits Spencer at home, he tells her that Tanner is punishing him for being in a relationship with her. He is done fetching coffee and making copies for her – he graduated from the police academy just like everyone else.

In court the next day, Alison’s lawyer is desperate, so she puts her on the witness stand. She proves that Alison can’t even throw a grapefruit with her right arm because her elbow was fractured when she was two years old and it didn’t heal properly – there was no way she could have body-slammed Mona and killed her with her bare hands. Alison’s defense backfires though, the opposing lawyer produces a certificate that Alison received in summer camp for her exemplary archery skills – which means there is nothing wrong with her arm. Aria, Emily, and Spencer all receive a text message from “A” while they are sitting in court, it says “Bullseye Bitches.”

Caleb, Ezra, and Mike rush back to Rosewood and try to file a police report with Tanner over what happened to Mike. Tanner doesn’t want to hear it, she tells them they have to go back to the county where the crime occurred to file the report.
The jury leaves court to deliberate, after a brief recess they return and announce that Alison is “guilty in the first degree.” The court room turns in to mayhem, Tanner orders the officer with her to arrest Spencer, Emily, and Aria – they fingerprint them and book them.