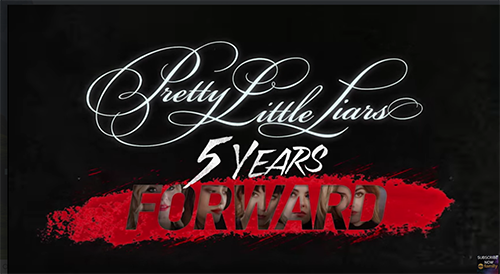 Pretty Little Liars Season 6 spoilers tease that the 2016 premiere of the wildly popular ABC Family show will air on Tuesday, January 12th, and the liars are all grown up. According to PLL spoilers, there will be a time jump – and Season 6B will pick up in Rosewood, FIVE years after the big “A” reveal. Spencer, Emily, Hanna, and Aria have lived five years “A” free – but now their past is coming back with a vengeance.

An all new Pretty Little Liars Season 6B promo just hit the internet, and it has everyone buzzing about all of the shocking PLL spoilers it has revealed about the all new season. Of course, the liars look a bit different, after all they’re adults now! Although, we’re still not sure how we feel about Spencer Hastings’ (Troian Bellisario) bangs.

The all new spoiler video seems to indicate that the liars have all travelled back to Rosewood for some sort of court case regarding Charlotte (aka Cece Drake) – maybe she is up for parole or probation? Old habits die hard, and the promo shows Alison DiLaurentis trying to force the liars to fudge the truth a bit when they go to court to testify.

Is anyone else concerned that Alison is now a teacher at Rosewood? Of course, it isn’t long after they are all back in Rosewood that the blocked calls and text messages start up again. The “A” game is back on! The all new Pretty Little Liars spoiler video reveals a lot about what PLL fans can expect when Season 6b premieres this winter.

First of all – Hanna Marin (Ashley Benson) appears to be engaged, and it is NOT to Caleb (Tyler Blackburn). Sad news for Haleb fans. Also, Caleb doesn’t seem too torn up about his and Ashley’s relationship hitting the fan, because he has been spending a lot of time with his new BFF Spencer. Pretty Little Liars rumors are already floating around and teasing a possible “thing” between Spencer and Caleb, and like Spencer’s bangs, we’re not sure how we feel about that yet either.

PLL Season 6B spoilers tease that Aria Montgomery (Lucy Hale) has some serious explaining to do – and judging from the promo video, she did some dirt back in the day that even the other liars didn’t know she did. And, now there is security video footage to prove it – and the new “A” is preparing to unleash it to the public.

Ezra Fitz will also be key component this winter on PLL, but it doesn’t look like he and Aria are still together – and there is a scary scene in the Season 6B promo video that shows Ezra screaming at the liars and kicking them out of his apartment. Yikes.

Check out the all new Pretty Little Liars spoiler video for Season 6B and let us know what you think of the promo in the comments below!