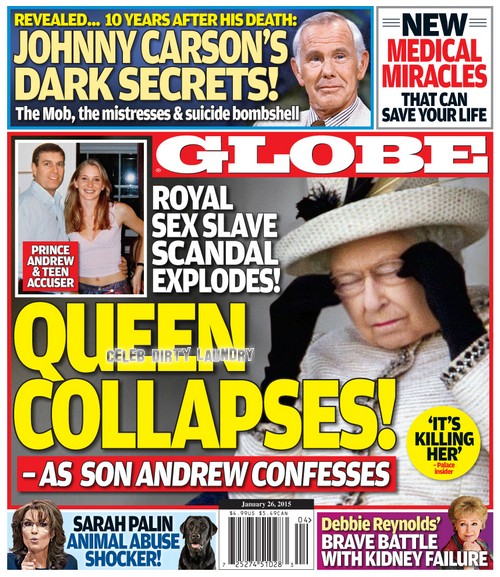 Prince Andrew’s sex scandal with an underage Florida teen has had a debilitating effect on the Royal Family’s image, and destroyed any remaining shreds of dignity Queen Elizabeth and her brood had. But, the stresses of the Royal Family’s latest scandal may also be the final straw in Queen Elizabeth’s deteriorating health. It’s no secret that Queen Elizabeth is on her last legs, and her son Prince Andrew’s latest transgression could be the final nail in the frail Queen’s coffin.

According to the January 26th edition of GLOBE Magazine, when news broke of Prince Andrew’s relations with a teen sex slave – he rushed home to his mother Queen Elizabeth and she did not take the news well. GLOBE’s Royal inside source reveals, “Andrew had never seen his mother this angry. And it was too much for the Queen to handle. She suddenly turned white as a sheet, went limp and fell backward in her chair. Her personal physician rushed to her side. The Queen has faced so many scandals with the youngest Royals over the years, but this shocking outrage could be too much for her to handle.”

Queen Elizabeth is 88 years old, and the last thing any 88 year old woman needs nor wants to hear on the news is that her favorite son had sex with a teenage sex slave – on more than one occasion, and even participated in orgies with the teen and other underage girls. And, it seems like as Elizabeth’s health deteriorates – more and more disturbing details of Prince Andrew’s sexcapades come to light. GLOBE Magazine goes on to explain, “The Queen was at first led to believe that the scandal was fanciful tittle-tattle. But she was shocked to learn that Andrew’s accuser Virginia Roberts, now a married mother of three living in Colorado, may be planning a tell-all book. Friends are concerned that the damage to the Queen’s heart may be beyond repair. She’s already a very sick lady who many believe only has months to live. This could bring the end sooner.”