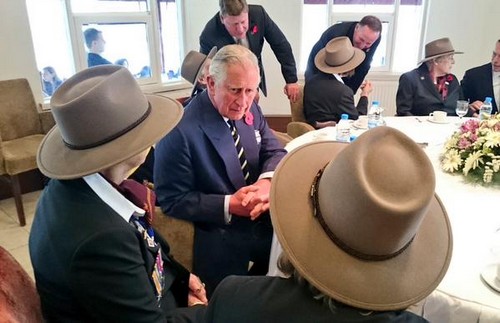 While the world continues to wait for the Duchess of Cambridge, Kate Middleton, to give birth to the next royal baby, which will be her second child with Prince William, Prince Charles has recently spoken out and confessed that he is hoping that the baby is a girl.

Prince Charles, who is the next in line to the throne, recently announced that he is wishing that Kate Middleton’s second child will be his first granddaughter.

The comments came when Charles, Prince of Wales, was chatting with one of the longest lived member of the Welsh Guards, Eric Jones. The two were chatting at the military ceremony for the Welsh Guards, and were accompanied by Queen Elizabeth, Prince Phillip, and Camilla Parker-Bowles.

Eric had introduced his daughter, Lynda Bateman, to Prince Charles, who proceeded to ask Jones, how many girls he had. Jones laughed and responded, “One, and that’s enough.”

That is when Prince Charles slipped and responded in a jokingly manner saying, “And we’re hoping for a granddaughter!”

Now, the pressure is on for Kate Middleton to give birth to a little baby girl. Kate Middleton is now six days overdue and reports are currently surfacing that the baby may not be born until into the first week of May. That means either Kate Middleton lied about her due date, or is just extremely over due.

While the rest of the family seemed to enjoy their time at the event, the rest of the world is eagerly awaiting the arrival of Kate’s second child with Prince William. Fans have been waiting patiently outside the Lindo Wing of St Mary’s Hospital hoping to wish the family well, and get their first glimpse of the new royal baby.

The young Duchess of Cambridge has been spotted out and about, and not at the Lindo Wing at St. Mary’s hospital, where she is scheduled to give birth to the newest addition to the Royal Family. Apparently, Kate Middleton has gone as far as to eat spicy curries to induce her own labor.

What do you think of Prince Charles’ comments? Do you want Kate Middleton to give birth to a baby girl, or a baby boy. Let us know in the comments below.