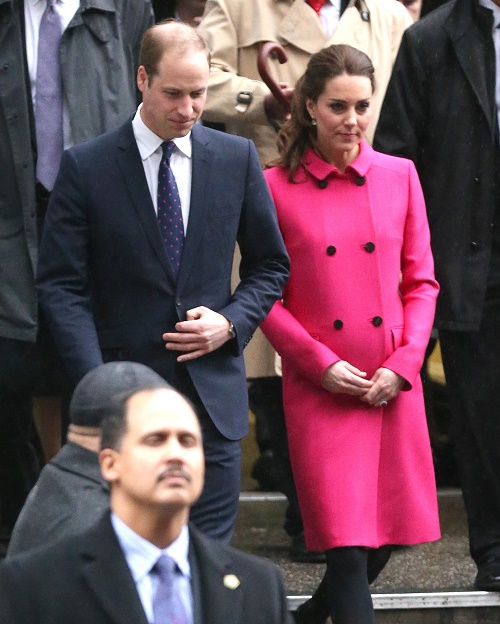 Prince William and pregnant Kate Middleton jetted off to Mustique for a romantic getaway before their new baby daughter is born! Prince William’s pregnant wife Kate Middleton’s baby bump is literally doubling in size, and in just twelve weeks the Duchess of Cambridge will give birth to Prince George’s baby sister. So what does royalty do while they are waiting for their Princess to make her grand debut? Head off to a romantic babymoon in Mustique, obviously.

Prince William and Kate Middleton recently packed their bags and jetted off to the Caribbean Island of Mustique, with their 18 month old son Prince George, and Kate’s parents. A Royal Family insider dished in the February 16th edition of Life & Style Magazine about the Royal couple’s trip, “The baby is with them, but so are Kate’s parents, who love to dote on George. It’s really been like their own little romantic getaway, because they can go for long walks on the beach alone or sit and read side by side or go for a swim. It’s been the most alone time they have had together in a really long time.”

So, how much does a trip to a private Caribbean Island cost? Well, Life & Style Magazine reveals, “They’re pampering themselves in the $21,000 a week Rocina Villa, a private four bedroom residence with a 30 foot pool, a gym, and it’s own full time staff to cater to the family’s every whim.” The odds of Prince William and Kate actually footing the bill are slim to none though.

Rumor has it that Queen Elizabeth sent the couple on the all-expenses paid trip in a desperate attempt to butter Will up and convince him to take the Throne so that the Royal Family’s fate doesn’t lie in the bumbling hands of his father Prince Charles and his wretched wife Camilla Parker-Bowles. Queen Elizabeth actually suggested the trip to the Royal couple, and hoped that some relaxing alone time would sway Prince William’s decision.

What do you think of Will and Kate’s babymoon? Is their expensive tropical vacation just a bribe from the Queen to convince Will to take the throne? Is a trip to Mustique really enough to sway Prince William’s decision? Let us know what you think in the comment section below!