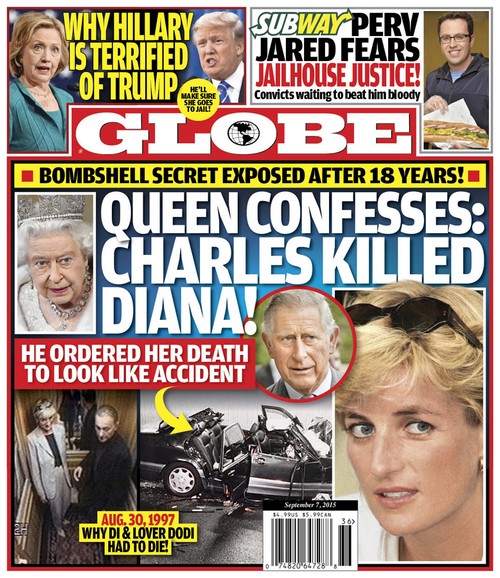 Sunday August 30, 2015 will mark the 18th anniversary of Princess Diana’s tragic death. Nearly two decades have passed since Prince Charles’ wife and her lover Dodi Fayed were killed in a fiery car accident while being chased after by paparazzi. Prince William, Prince Harry, and the people of England have never really gotten over Princess Diana’s death – however the royal family is eager to put it in the past.

Over the years dozens of conspiracy theories have popped up, indicating that the royal family might be responsible for Princess Diana’s and Dodi’s deaths. Some Princess Di fans even believe that she was pregnant with her lovers’ baby, and the royal family took matters in to their own hands because they didn’t want her to have a child out of wedlock that was not of royal decent.

This week’s cover of GLOBE Magazine addresses Princess Diana’s tragic death 18 years ago, and the shocking headline reads: “Queen Confesses Charles Killed Diana.” The cover of GLOBE goes on to say that Charles ordered Diana’s death to “look like an accident,” and they promise to have inside information on “why Di and Dodi had to die.” This isn’t the first time sources have come forward and claimed that Prince Charles was behind Princess Di’s death, and it probably won’t be the last – but it is always interesting to hear what they have to say.

So, do you believe the conspiracy theories surrounding Princess Diana’s death? Do you think the royal family is at fault? Let us know what you think in the comments below and don’t forget to pick up this week’s issue of GLOBE Magazine as soon as it hits newsstands.