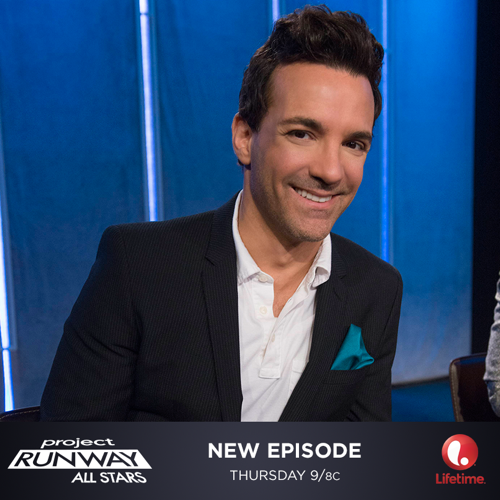 Tonight on Lifetime Emmy Award winning Tim Gunn’s Project Runway All Stars continues with an all new Thursday January 22, season 4 episode 10 called “Versatile Tops and Bottoms” and we have your weekly recap below. On tonight’s episode, the designers get educated by the judges.

On the last episode, Avant-garde fashions were created as inspired by underwater life. Did you watch the last episode? If you missed it, we have a full and detailed recap right here for you.

On tonight’s episode as per the Lifetime synopsis, “Alyssa and the judges take over Times Square to educate the designers in the business of fashion.”

This week’s “business” challenge is a partnership with QVC. The challenge is to make separates, a top and a bottom. They also need to create a second, fashion forward look, which will be worn by a second model. The winner will have one of their pieces created and sold as part of a line on QVC. Each contestant has a total budget of $300.

Helen doesn’t do separates or ready-to-wear, but not wanting to be pigeonholed as an eveningwear designer, she wants to do well on this challenge.

Fabio, unable to find the perfect fabric, is using a couple of dyes to create his fabric. Jay’s strategy is just to pick out a bunch of fabrics and work it out in the studio. Dmitry is making a suit for his ready-to-wear look, using blue neoprene to create a wrap jacket and a skirt.

Zanna comes in to give highly subjective critiques of all the designers’ work in its current state. Dmitry’s look is called “quite extreme” for a ready-to-wear commercial look for QVC.

Sonjia is criticized for making yet another pencil skirt. Zanna tells her she doesn’t want the judges to have any reason to ask if she is capable of doing anything else.

Dmitry hates on Fabio’s custom print, which currently looks like blue and pink paint haphazardly thrown on a piece of cloth.Fabio ends up taking that fabric, putting it on the model like a potato sack, and wrapping a ribbon around her waist.

Sonjia doesn’t know what she wants to do with her fashion forward look, so she just cuts a dress straight from the yellow fabric she has. “I wouldn’t be caught dead in a million years designing something like that,” Helen says in the confessional.

Hence, there was two set of dishes (completely chosen on their own accord) that the judges loved the most and they belonged to Gabe and Tristen. Thankfully the artist behind these dishes weren’t revealed until after the judges had made their choice because once Marcus found out it was his team that did so well – he we was proud as a peacock.

But there was still Ben and Eric to deal with and both men had disappointed the judges with their food choices. Ben’s food wasn’t cohesive with each other and as for Eric – he had tried to do something different and yet left his plate with a “mushy” texture.

So no surprises here, Eric was sent packing and Ben was allowed to join Tristen and Gabe in the Grand Finale. You see what Eric did brought down his whole dish. Yet, what Ben did was making two great dishes that didn’t seem like they were connected to each other in any form or fashion. So of course Ben’s dishes were chosen over Eric.

Though, the judges all told Eric that regardless of his last plate they still believe he has a future in the kitchen. And they hope he doesn’t give up on it after this recent setback.

In the meantime, as far as the final three goes, they were still in the competition. And so they got to have that master class with Jonathan in which they found out what he believes to be is the perfect meal. That’s important thing for the guys to learn because the last challenge requires the cooks to prepare a three courses “perfect” meal.

And some of them ended up finding the class useful. For it turns out there still is a lot to learn and Tristen, the natural student, definitely enjoyed being back in the classroom.

Helen keeps hating on Sonjia’s yellow dress, which is now accompanied with a grey jacket, saying it looks like it belongs on an old lady.

Dmitry’s blue suit and yellow and black lace dress are praised for both being beautiful designs; however, judges disagree on how fashion forward his dress is.

Fabio’s deplorable top and shorts are praised, with one judge calling it possibly the most sellable of the designs shown. Isaac Mizrahi, however, shows some sense and calls them “somewhat irrelevant.”

Sonjia’s ready-to-wear grey set is praised, and so is her “edgy” yellow dress.  Jay’s red dress is called “unforgivable” by Mizrahi, and Michelle’s red print is attacked.

While deliberating, the judges discuss that Dmitry’s blue suit seems more “fashion forward” than his off the shoulder yellow dress. Sonjia is praised for being the only one to properly utilize the two piece. Jay’s black pants and the hem of his red dress are eviscerated. Fabio’s fingerpaint dress is criticized for not being fashion forward.

Sonjia wins the challenge and Jay is eliminated.