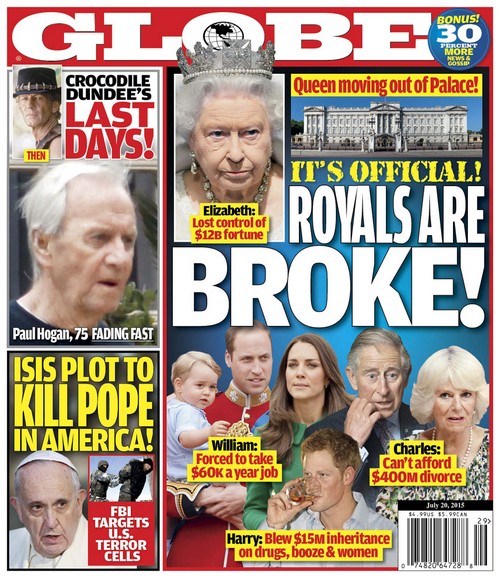 Queen Elizabeth just found out she is basically broke, and she is not a happy camper – the Queen has reportedly put the entire royal family on a strict budget and there is a chance that she could lose Buckingham Palace, which is where she has lived since she was a young child! According to a new report, Buckingham Palace is in bad shape, like really bad shape, and it probably would have been condemned already if it wasn’t for the fact that the Queen of England is living there. In order to make the Palace safe to live in, and to pass all building and safety codes, the Queen would have to pay $250 million for urgent repairs – which she does not have.

According to the July 20 edition of GLOBE Magazine, the Queen’s accountants have been giving her the run-around for months, because they didn’t want to have to tell her the truth – that she has less than $3 million to her name. Apparently Queen Elizabeth’s accounting team were banking on the fact that the 89 year old might die before she completely ran out of money, and then she would never have to know how relatively broke she really was.

One of GLOBE Magazine’s royal family insiders revealed, “The Queen had no idea the crisis was so dire. Her advisors hid the truth, her advisors hid the truth thinking that she would soon be dead and wouldn’t have to face the misery of losing her beloved home.” So, how bad exactly is Buckingham Palace? Well, electricians have assessed the damage and say that the electric wires are decaying and the masonry is deteriorating, it is a safety hazard even being inside the palace – let alone living there. According to GLOBE Magazine, “Staff has been forced to catch rain water in buckets to stop historic artworks and antiques from being destroyed. The Queen’s daughter Princess Anne narrowly escaped death when bricks and plaster collapsed while she was relaxing in a lounge.” And the list of repairs goes on and on, apparently there is asbestos, crumbling timber, and even plumbing issues.

So, how is Queen Elizabeth planning on saving the Palace, and avoiding bankruptcy? According to GLOBE Magazine, she has told Prince Charles that his $400 Million divorce from Camilla Parker-Bowles is on hold. He is just going to have to grin and bear it, because they can’t afford to pay off the Duchess of Cornwall at this time. Prince Harry and Prince Andrew are basically cut off – after all their wild partying and subsequent scandals are partially responsible for Queen Elizabeth’s lack of money. And, they are even renting out rooms in the palace for non-royals to live – in a desperate attempt to raise some money for repairs!

Do you believe that Queen Elizabeth is as broke as the media is portraying her to be? Is there a chance that the Palace could truly be condemned? How funny is it that the royals are on a budget and pinching pennies? Will we see Kate Middleton in line at the supermarket cutting coupons soon? Let us know what you think in the comments below!