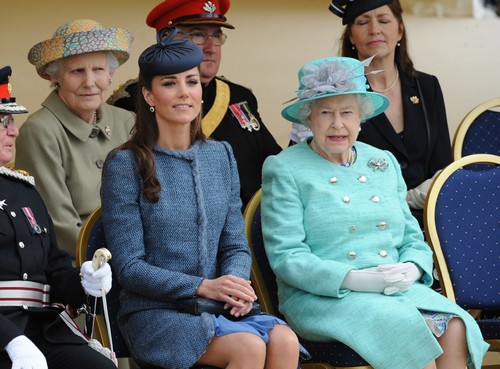 Prince William and Kate Middleton left the hospital after their baby girl Princess Charlotte Elizabeth Diana was born and headed straight to Amner Hall with their newest addition to spend some quality family time with her and Prince George. But Queen Elizabeth is forcing Kate Middleton to move the baby in to Kensington Palace with the rest of the royal family so that she can keep a close eye on the new heir.

The June 1 cover of Life & Style Magazine features a photo of Kate Middleton and Queen Elizabeth, captioned “New Mom Nightmare: Queen Drags Kate Back To The Palace.” While Queen Elizabeth might just seem like a doting grandmother who wants to spend some time with the new baby, the monarch most definitely has ulterior motives. Since Princess Charlotte was born, Queen Elizabeth has been embroiled in a bitter feud with Kate Middleton’s mother Carole Middleton over the baby, and was furious when Carole got to meet the Princess before she did.

According to multiple reports, Kate and Will invited her parents Carole and Michael Middleton to move in with them at Amner Hall – and Queen Elizabeth was furious. By forcing Kate to pack her bags and reside at Kensington Palace, the Queen is trying to ice out the commoner Middleton Family. The ongoing battle over Prince George and Princess Charlotte has been in the news for weeks. Queen Elizabeth is tired of Carole Middleton monopolizing time with the kids, and raising them like commoners instead of royal heirs. By moving Kate and the kids in to Kensington Palace, Queen Elizabeth can put some distance between Carole and the kids, and ensure that they have the proper upbringing that Prince and Princesses should receive.

Do you think that Queen Elizabeth is overstepping her boundaries? Will Kate Middleton fall in line and follow the Queen’s orders – or put her foot down and remain at Amner Hall with the Middletons? Let us know what you think in the comments below!