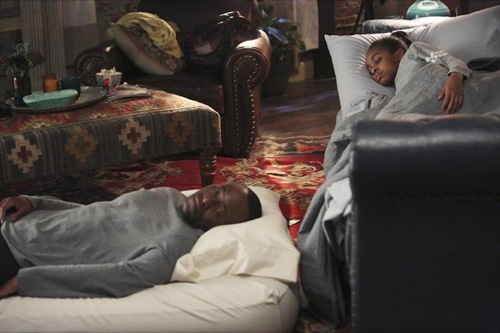 Tonight on ABC Resurrection continues with an all new Sunday January 4, season 2 episode 10 called, “Prophecy,” and we have your weekly recap below. Tonight on the winter premiere, Arcadia loses power when a violent storm hits; at the same time, the Langstons [Matt Craven] and Bellamy [Omar Epps] search for Jacob [Landon Gimenez] and Margaret, who seem to have disappeared; and a mysterious stranger arrives in town

On the last episode, Arcadians mourned the loss of a beloved member of the community. The stem cells from Rachael’s baby did provide the cure for the virus, but when Rachael suddenly went missing, Bellamy and Maggie turned to an unexpected source for help. Henry learned the truth about Margaret and his family’s role in the factory fire. Did you watch the last episode? If you missed it, we have a full and detailed recap, right here for you.

On tonight’s episode as per the ABC synopsis, “As a violent storm hits Arcadia, knocking out all the power, Jacob goes missing – along with Margaret, and The Langstons and Bellamy struggle to find them. Meanwhile, the tempest signals the arrival of another visitor – a stranger (guest star Jim Parrack) with a mysterious link to Bellamy”

Tonight’s Resurrection Season 2 episode 10 is going to be exciting, and you won’t want to miss it. So be sure to tune in for our live coverage of Resurrection — tonight at 9 PM EST!

Tonight’s episode of Resurrection kicks off with Lucille and Henry frantically searching for Jacob, they realize that Margaret’s car is gone and she had to take them. Meanwhile, there is a crazy storms outside and thunder and lightning. Maggie and Fred head to Bellamy’s and tell him that Jacob is missing – he rushes out with them to help them search. Elaine is trying to get the generator turned on because the electricity is our and a man stumbles in – he has been struck by lightning and says he “needs to save the boy.” Elaine rushes to get the first aid kit and when she comes back the mysterious man has left and went back outside in to the storm.

Henry and Lucille have no power or phone – Henry and Bellamy arrive, they inform them that Margaret is the one that took Jacob. Henry reveals that he and his mom had a huge fight and he thinks that she may try to hurt him. Fred reveals that he thinks Margaret might have been involed in Margo’s disappearance. They get a call from Elaine and learn about the mysterious man that was rambling about a boy – Bellamy and Fred leave to investigate.

Meanwhile, Margaret and Jacob are inside what looks like an abandoned building or barn. Jacob asks her where they are – and she says they are “where it all began.” Henry and Fred are driving around town frantically searching for them. Jacob lies down and he and Margaret discuss what it will feel like when they die again – she tells him it will be a “wonderful adventure and no one will tell them what to do.” Henry confesses that he is going to miss his parents, but he thinks he will see them again after they die.

Margaret stays behind at the house with Lucille – she tells her about the night that her mother and Jacob died. Lucille says that she had an exam that day and stayed up all night, she dozed off with a book on her chest and when she woke up Jacob wasn’t in the house because while she was sleeping, he was drowning. Maggie tries to reason with her and tells her she can’t blame herself for Jacob’s death.

In the old barn Jacob asks Maggie to tell him about the day that she got married. Aggie explains that it all started with her father – he worked at the factory and the foreman made him do bad things. The foreman forced her father to “give her a better life” and had her marry one of the Langstons.

The next morning Bellamy finds the man that was struck by lightning walking down a dirt road. He has no idea that it is the same man that was seen the night before. He tells Bellamy he was “looking for a boy but he is gone now.” The man leaves – and Fred and Henry arrive. They decide to all go down the road where the old barn is to see if Margaret and Jacob are there. When they arrive at the barn they find Jacob and Margaret and Bellamy drags Jacob back to the car kicking and screaming as Margaret sneers to Henry that she always hated him because he was half Langston. Jacob is reunited with his mother Lucille, but it is obvious he is not happy about it. Henry reassures Lucille that Fred is taking Margaret away.

Bellamy leaves and meets with a little girl – he reveals to her that he is her sister, and she is going to be living with him now. Bellamy shows her the moon mark on his back and she is thrilled and hugs him. He invites her out to ice cream with him to meet his special friend.

Back at the house Lucille and Henry are fighting, she blames him for his out of control mother kidnapping Jacob and trying to brainwash him. Henry snaps back that it was her fault that Jacob died in the first place because she was sleeping and not watching him when he drowned. Lucille kicks him out of the house and tells him not to come back for the night.

Fred takes Margaret out, and pulls over on a dirt road. They are meeting a man that is taking her to a return facility. While they are waiting, Fred asks how she got rid of Barbara? Margaret explains that she didn’t get rid of her, she just encouraged her to “let go,” and let her mind go blank and not think of anything or anyone and then she disappeared. Fred wavers and decides he doesn’t want to put his mother in the facility – but Margaret refuses and insists she is going, she wants to be with the other returns.

Bellamy and Maggie head out to eat with his sister, wile they are eating the man that was struck by lightning walks in. His sister runs and hugs him and reveals that he is Preacher James. He introduces himself to Bellamy and then leaves. Later that night Bellamy wakes up out of a sound sleep and heads outside to a field where the preacher was struck by lightning the night before. He puts his ear to the ground and listens – a huge swarm of bugs flies up out of the ground. James arrives and tells Bellamy that “this place is sick, but together they will heal it.”