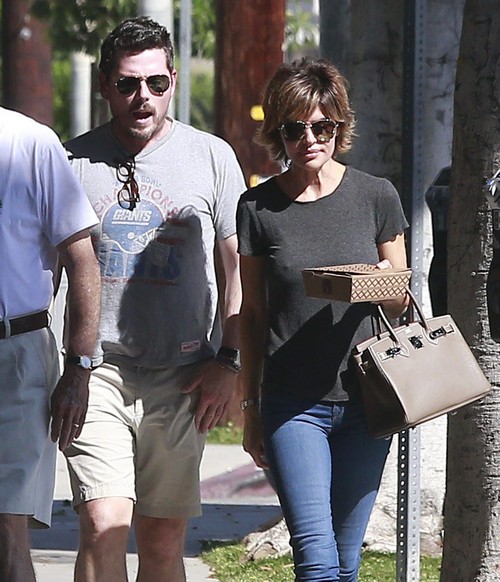 RHOBH Season 5 Reunion Special spoilers promise Lisa Rinna violence and insanity and Brandi Glanville at her entertaining best! The end of ‘The Real Housewives of Beverly Hills Reunion’ will not disappoint, and deliver the drama that comes with catty women vying for attention. Each wife brings confessions, scandal, and outbursts that get violent this season. It’s a strong possibility the RHOBH Reunion Special will be the highest rated episode ever, thanks to sources sharing inside information.

Shocking confessions, scandalous discoveries, and physical outbursts will pack ‘The Real Housewives of Beverly Hills Reunion Special’ according to these RHOBH spoilers. Lisa Rinna might take the crown as Drama Queen. As we reported, the former soap actress continued her anger-fueled violent rampage. Rinna loses all control after rumors say her husband, Harry Hamlin’s cheating scandal was exposed.

The fellow RHOBH cast members and crew were completely shocked as Lisa’s angry and violent reaction made her previous incident of grabbing Kim Richard’s throat look tame in comparison. Viewers will see a side of Rinna that is even more terrifying, and left everyone questioning her mental health!

RHOBH’s Kyle Richards also confirmed to E! News the reunion was “worse than Amsterdam” and Richards capped off the comment by stating, “I didn’t leave my bed for two days after the reunion. I couldn’t go anywhere. It was just so upsetting.” In further regard to the Kim and Kyle Richards feud, the duo are still not speaking. Kyle insists there is no hope for reconciliation. “I’m the kind of person where I get over everything. I not only forgive, I forget. At this point in my life, it’s too much negativity, and it’s very toxic for me. I know that to be friends with her, it’s just setting myself up to be attacked again. I’m making a conscious decision to keep away because life’s complicated enough.”

During Brandi Glanville’s podcast, Brandi Glanville Unfiltered, the RHOBH member confessed, “I have post-traumatic reunion syndrome. I don’t think I was on my best behavior.” Brandi also claims that Lisa Rinna “put on a character” and most of her behavior and reactions were stunts.
Glanville didn’t go too much into her part in the drama of the reunion special, but she did admit she played her role in the drama. “The hardest part is you want to fight the fight. I went in there saying, ‘I’m gonna be quiet the whole time – I’m not giving them anything…’ And then I lost my temper and it was craziness. Having said that, I have to own what I did and said. Just don’t watch it.”

Sounds like Brandi Glanville is on damage control after looking like a lunatic on the RHOBH Reunion Special. Who do you think will have the most post-reunion PR work to do? Sounds like Lisa Rinna’s fight might dominate the post RHOBH gossip. Come back to CDL for more The Real Housewives of Beverly spoilers and news!

‘Real Housewives Of Beverly Hills’ star Lisa Rinna spotted out for lunch with friends in West Hollywood, California on March 14, 2015. Rumors are swirling that on the upcoming recap special of ‘RHOBH’, Lisa gets extremely violent after it is exposed that her husband Harry Hamlin is cheating on her. FameFlynet