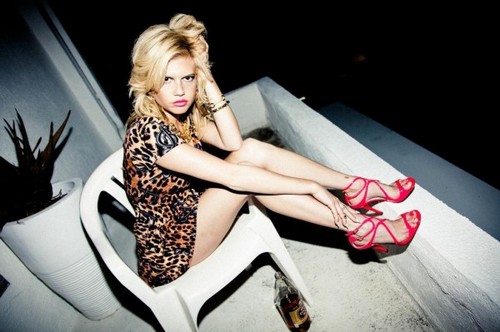 Ridiculousness co-host and D-List celeb Chanel West Coast was arrested outside of a Los Angeles nightclub on Tuesday August 4 – for punching and kicking a cop. She’s so hardcore. For those of you who don’t watch MTV or follow Rob Dyrdek’s shows like Ridiculousness and Fantasy Factory, you probably have never heard of Chanel West Coast. Aside from her “rapping career” – which still hasn’t taken off after nearly a decade of endorsements from her pal Rob Dyrdek, Chanel West Coast basically is semi-famous for doing absolutely nothing except for laughing like a chipmunk.

According to TMZ, Chanel was obviously inebriated when leaving the LA nightclub, and somehow she wound up in an altercation with a police officer. She proceeded to punch to cop, and then he even gave her an opportunity to leave without being arrested after the fact. Did she leave? No, instead she opted to kick the cop – and shout at him that she has been on television for 17 seasons and inform him that he couldn’t arrest her because she was super famous. Apparently the cop has never heard of Chanel West Coast, nor was he aware of super famousness, because he slapped the cuffs on her and carted her away in his police car.

Chanel West Coast’s “friends” were kind enough to record Chanel being whisked away in the cop car and sold the video to TMZ first thing in the morning. So, there could be some light at the end of the tunnel, sure Chanel got arrested and all that – but hey maybe this will give her stagnant career a much-needed boost, and maybe even give her some street creds so all of the rappers will stop laughing at her.
What exactly do you think transpired in front of the nightclub to make Chanel West Coast assault a police officer? Is this going to help or hurt her D-List celebrity status? Let us know what you think in the comments below!