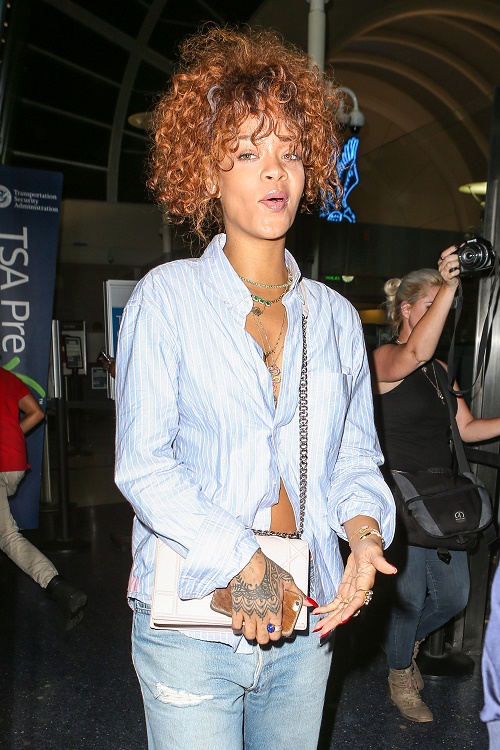 Rihanna and Karrueche Tran may have finally stopped fighting over Chris Brown, but they have a new man to fight over – French soccer player Karim Benzema. It’s no secret that Rihanna likes to play the field, but this summer she shocked everyone by settling down Karim and actually attempting to be in a monogamous relationship. Just dating one guy is a huge deal for Rihanna! But it looks like she chose the wrong guy to settle down with – because Karim has been reportedly cheating on her with Chris Brown’s other ex Karrueche Tran!

According to an all new report from Life & Style Magazine, Karim Benzema has been hooking up with both Rihanna and Karrueche! An insider dished to Life & Style, “Rihanna is Karim’s main chick, but Karrueche is his side chick. He will bring Rihanna to party with friends and sleep over at his LA rental. With Karrueche he will have his driver pick her up and bring her to him at a hotel.”

What are the odds that Karrueche Tran would just happen to be sleeping with Rihanna’s boyfriend? The tabloid’s source insists that it is completely innocent, and Karrueche started hooking up with Karim on June 11 – before he and Rihanna went public with their relationship. We’re having a tough time buying it though. Karim and Rihanna may not have technically “gone public,” but everyone in their inner circles knew they were together long before the tabloids did – it’s hard to believe that Karrueche didn’t catch wind of their relationship before she started sleeping with him. There are how many guys in Hollywood, and she just happened to wind up sleeping with Rihanna’s boyfriend?

Even if by slight chance Karrueche didn’t know that Rihanna and Karim were dating – why would she continue hooking up with him after the fact? How do you think Rihanna will react when she learns what, or who, her boyfriend has been doing? Share your thoughts and theories in the comments below!