Rihanna Coachella Drug Controversy: Was That Weed or Cocaine? 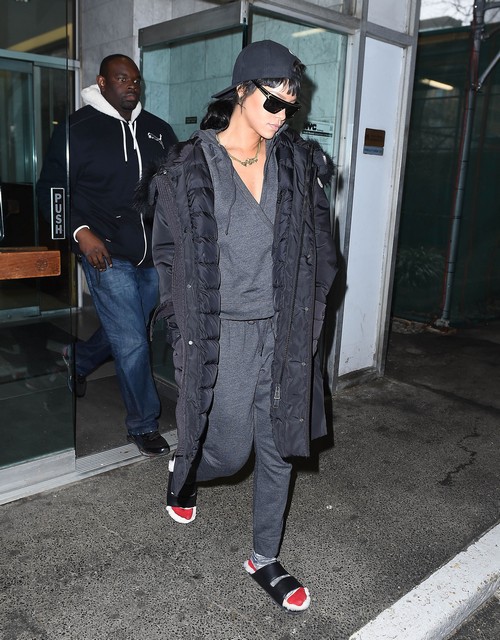 Rihanna was recently spotted at the Coachella music festival allegedly sniffing what appeared to be cocaine. The green-eyed beauty vehemently denied the accusations that she was using the stimulant. Alleged video evidence leaked to Instagram from the Coachella jamboree, purportedly captured the star prepping to inhale an unknown white substance. However, the said video was quickly deleted from Instagram, which initially showed the 27-year-old-singer holding a slim cannula in her hands. As the camera was repositioned to capture her friends dancing, the lens was then allegedly pointed “back to Rihanna holding her nose” for a few seconds. Social media was lit up today, as fans and haters alike weighed in on the apparent misunderstanding.

As reported by complex.com, once the video was taken down from Instagram, Rihanna followed up by posting a similar video recording, but she insisted that she was preparing a joint based with tobacco, nothing more and nothing less. Rihanna was obviously enraged that people would view her in that way, especially considering that her father is now a recovering drug addict.

See some of the nasty responses from Rihanna below:

“Your lame ass got some f**king nerve!!! Any fool could see that’s a joint that I’m basing with cigarette! Who tf snorts tobacco??!! FOH witcho “never been to a rodeo so someone squeezing their nose means they’re doing coke” looking ass!!

Various responses from the public:

King Anthony ‏@TrillAC_ wrote: “Rihanna look like a chick that would try anything. Nothing shocking about her doing coke at all.”
@Eyeduzdis added: “Call me crazy, but is Rihanna doing coke in the background?”
@BlackBoyMiah said: “Lmao, there’s no legit proof Rihanna is doing coke, everyone’s being extra.”‏
@OutOfLeftField wrote: “Rihanna was caught on video snorting coke. Could’ve been worse. She could’ve been caught on video singing.”
@AllPinkSparkle mused: “Lmao to people who think Rihanna doing coke would lessen the love.”
@officiALLIE__said: “Am I the only one that doesn’t think Rihanna was sniffing coke….? It looks like she was rolling a blunt to me.”

Although Rihanna, real name Robyn Fenty is no stranger to going against the grain, and doing things her way, she was also plagued with questions about supposedly “cutting up a white powdered substance on the top of a man’s head,” back at Coachella in 2012.
What are your thoughts? Is Rihanna heading down a road to addiction like her father who struggled with the disease for many years?