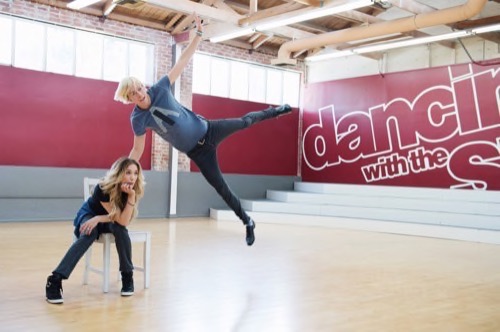 Tonight on ABC the glitz and the glamor returned to the ballroom for another great season of Dancing with the Stars.  On tonight’s premiere episode Riker Lynch and his professional dancer Allison Holker danced a Jive to “What I Like About You” by The Romantics. Did you watch tonight’s episode?  If you missed it we have a full and detailed recap, right here for you. Did you miss any of tonight’s performance videos?  If you did we have them all, right here for you!

Riker Lynch is an actor, musician and a songwriter originally from Littleton, CO. He has been singing and performing since the age of 3 and was originally cast in Hollywood as Jeff Sterling, one of the members of the Warblers, the acappella group featured in GLEE. He appeared in seasons 2, 3 and 4 of GLEE, and also appeared as a Warbler in the 2011 edition of the Glee Live!.

Judges’ comments: Bruno: “You are cool, hip and your timely is great. You are brilliant – you dance like my friend Billy Idol.” Carrie Ann: “It was fun, but not brilliant. Nice job.” Len: “Lot’s of energy, next week is the Fox Trot and you need to have refinement and get elegant.” Julianne: “I am so excited about this partnership, this was the perfect combination. Your flips were so tight and so sharp.”