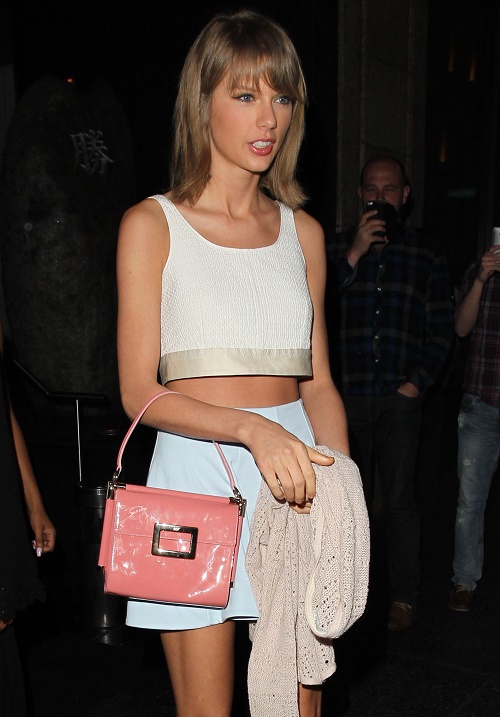 Taylor Swift is head over heels in love with her boyfriend Calvin Harris even though she and the DJ have only been dating for a few months. Taylor is rumored to already be planning their wedding, is working on a prenuptial agreement, and sources say that she might even propose to him! But Taylor’s pals are suspicious of Calvin – and for good reason. Not only is he a prolific player, but he also completely screwed over his ex-girlfriend, Rita Ora. Taylor may want to pick up this month’s issue of Marie Claire before she goes putting a down payment on wedding venues.

Rita Ora landed on the cover of Marie Claire Magazine, and in the new edition she gave an exclusive interview on what happened between her and Calvin Harris. Aside from all of the cheating that Calvin is rumored to have done on Rita, he also held the rights to a song they created together hostage and forced the singer to cancel an appearance last minute that she had scheduled at the Teen Choice Awards.

Rita dished to Marie Claire, “There was a reason why I split up with him. And there was a reason why I’m at this point in my life where I feel like I have so much musical freedom, and I don’t have to explain myself to anybody. It was more of a thing where I was in awe. I was at that point in my relationship where I felt he could do no wrong. I thought he had my back and that he’d never steer me wrong. But then ‘I Will Never Let You Down’ came out, and everything started to go a bit weird. I don’t know if it was because business was mixed with personal or what.”

Calvin Harris has been on his best behavior since he began dating Taylor Swift, but is it all an act – will his true colors start shining through? Do you think Taylor will fall for Calvin’s charms and record a duet with him too? Or do you believe that Calvin has truly turned over a new leaf and will never treat Taylor the way he did Rita? Let us know what you think in the comments below!