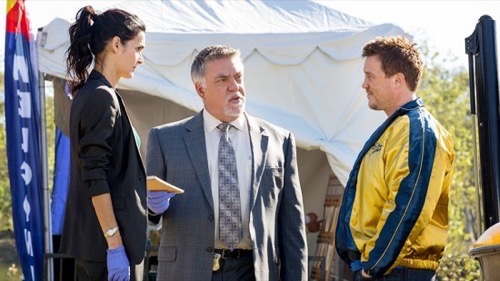 Tonight on TNT RIZZOLI & ISLES returns with an all new Tuesday, June 23 season 6 episode 2 called, “Bassholes,” and we have your weekly recap below. On tonight’s episode, a tournament-leading fisherman is killed, plunging Jane [Angie Harmon] and Maura [Sasha Alexander] into the high-stakes world of competitive bass fishing. Meanwhile, Frankie [Jordan Bridges] is in hot water when he loses a bet.

On the last episode, when it appeared one of our own shot an unarmed man on a busy Boston subway platform, the team had to fight to find the real killer while clearing our detective’s name. But with Internal Affairs breathing down our necks, it becomes clear that the circumstances surrounding this shooting were anything but clear. Did you watch the last episode? If you missed it, we have a full and detailed recap right here for you.

On tonight’s episode per say TNT Synopsis “Jane and Maura find themselves submerged in the cutthroat, high stakes world of competitive bass fishing when a tournament-leading fisherman is killed. At the same time, Frankie is paying the price after losing a bet.”

Maura and Jane have been assigned to a new case on tonight’s all new episode of “Rizzoli & Isles” and for some reason the cause of death seems to be stumping Maura.

The body of Mark Harris was found in the early morning. The victim had been on his boat and was actually in the middle of a fishing contest when he was murdered. And there is no doubt about that last part. A bullet hole kind of told a story all on its own.

There was something else at the scene that made Maura doubt whether or not it was just the bullet that killed their victim.

Unfortunately, there was an unexplained puddle of blood near the body. And for Maura that puddle simply didn’t make any kind of sense. So it wasn’t until she had the body back at the lab that she knew Jane’s case was actually going to be a lot harder than they both had originally thought.

See, there was puddle because Mark had been taking blood thinners at the time of his death. So that means that whoever killed him could have done so a good 60 feet away (widening their pool of suspects) and that they didn’t even have to be an expert shot. Maura later told Jane that even a wound to the arm would have caused their victim to bleed out.

So a look into the once cool and collected college professor’s life revealed only one thing and that is someone wanted him dead because of his fishing expertise.

Sounds odd buts its true. Mark was an excellent fishermen and lately he’s been winning every contest he could enter. And with the winning prize being a hundred grand now and half a million in the finals – it’s not that surprising that someone wanted Mark out of the way.

Plus, fishermen aren’t exactly an honorable lot. Earlier, Mark had been accused of cheating and at the time of his death someone had also sent him a death threat with a bag of fish. The fish actually came from foreign water. Someone was either accusing Mark of cheating or warning him with their own ill-gotten gains.

And if the detectives needed further proof of how cold blooded this competition could be, then they saw that for it themselves when they brought in some of Mark’s most vocal adversaries.

Out of all the guys, the majority of them did not seem to care about a body being found on the same lake they were all fishing in. In fact, they were more concerned about who would get Mark’s fishing stuff now that he’s dead. Because in their mind there is still a very important competition going on and all they want to know is how Mark cheated so that they can then copy him.

However, there was one person that was taking the investigation seriously. And it just so happens that’s this same man claims he had overheard Mark fighting with his girlfriend in the lead up to the competition.

Technically, Mark was married, but his wife Carla was on the brink of divorcing him after he got himself wrapped up in this whole fishing thing.

Mark was actually going through a separation when he met Linda. Linda is into fishing as well and often she would help him make his fish bait. And, well, one thing led to another and Mark soon was in a relationship.

According to both Linda and Carla, Mark and Linda were no longer a couple when he died. Linda said that he just wasn’t meant for her type of lifestyle. And Carla told them that her husband had decided to drop out of fishing in order to work on their marriage.

Therefore, with reports of the two fighting and that he was going back to his wife, Jane and Korzak brought Linda in one more time and they hounded her. They mention they could trace the letter and that they could trace her weapon. So unless she wanted the longest possible sentence – she had to confess.

And confess she did.

Her excuse was that she had too much to lose.

On the topic of losing, Frankie ended up losing a bet to Korsak. As punishment, he had to carry around a bag of flour as if it was his child. But his mother inadvertently made cupcakes out of her newest grandchild when she saw the flour at the office and decided to give up on her diet.