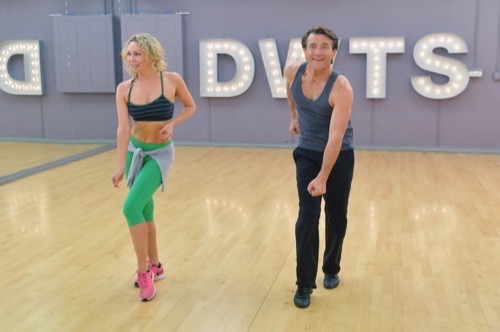 Tonight on ABC the glitz and the glamor returned to the ballroom for another great season of Dancing with the Stars.  On tonight’s premiere episode Robert Herjavec and his professional dancer Kym Johnson danced a Cha Cha to “Bills” by Lunch Money Lewis. Did you watch tonight’s episode?  If you missed it we have a full and detailed recap, right here for you. Did you miss any of tonight’s performance videos?  If you did we have them all, right here for you!

If you are not familiar with Robert Herjavec he is recognized as the “nice” Shark on ABC’s Emmy Award- winning hit show Shark Tank. Born in Croatia, Robert and his family fled communism in the former Yugoslavia with just one suitcase and $20 to their name. As Founder & CEO of Herjavec Group, Robert has grown his cybersecurity business over 12 years from $400K in sales and 3 employees to $140 million in sales and 250 employees worldwide. Robert is a proud Dad, a bestselling author, a marathon runner, a Ferrari racecar driver and is thrilled to be able to soon say “a dancer!”

Judges’ comments: Julianne: “I am completely blown away, I was not expecting that. You looked like you had the time of your life. You had really sharp legs, pointing your toes, amazing.” Bruno: “What a pleasant surprise. I got Flipper, the crazy dolphin, you had so much fun with it. Watch your timing.” Carrie Ann: “You were like a 14 year old dancing, your technique and your hips were great.” Len: “You shocked me, I thought the shark was going to be a fish out of water. You are too light on your feet though and your hips could have worked a bit more. We want to see you grow and go.”