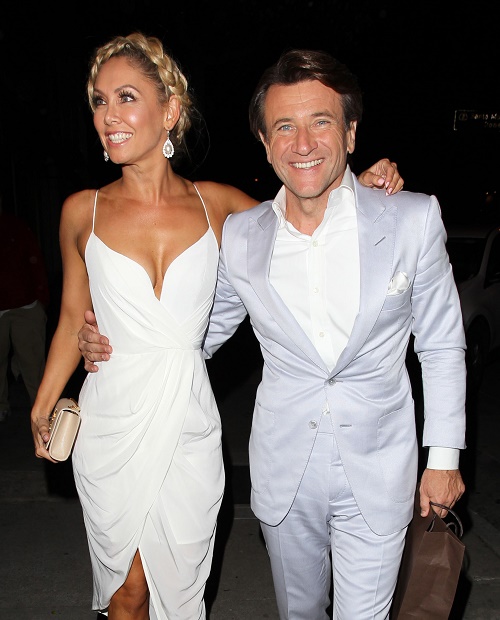 Shark Tank millionaire Robert Herjavec and pro dancer Kym Johnson were just eliminated from Dancing With The Stars – but that doesn’t mean the couple is over for good. Herjavec and Johnson refused to confirm on the ABC dancing competition whether or not they were dating – however, considering the fact that everyone on set has seen them all over each other, they were caught kissing in the rehearsal room, and they can’t keep their hands off from each other during interviews. It’s pretty clear that they are a couple.

Dancing With The Stars fans love the idea of Robert and Kym together – but his ex-wife Diane Plese is not impressed, and has been reportedly causing some major drama between Kym and Robert. Kym is well aware of his previous cheating scandals, so she is having some issues trusting Robert. But, our insiders say that Robert is madly in love with his dance partner and even told her that he will marry her to prove how serious he is about their relationship.

Will Robert Herjavec risk his million dollar empire to be with Kym Johnson though? A source close to the couple dished to CDL, “Robert basically proposed to Kym and told her that he would marry her right here and now to prove that he is over Diane and wants to be with her. Kym has been seriously considering it, but she told Robert she would only go through with the shot-gun wedding on one condition, he wouldn’t make her sign a pre-nup. When Robert told his pals about Kym’s ultimatum, they strongly advised against it. They thinks she is just after his money.”

Do you think Robert Herjavec and Kym Johnson are crazy to get married so soon? Would Robert actually risk everything and not make her sign a pre-nup? Is Kym really in love with Robert, or just his bank account? Let us know what you think in the comments below!