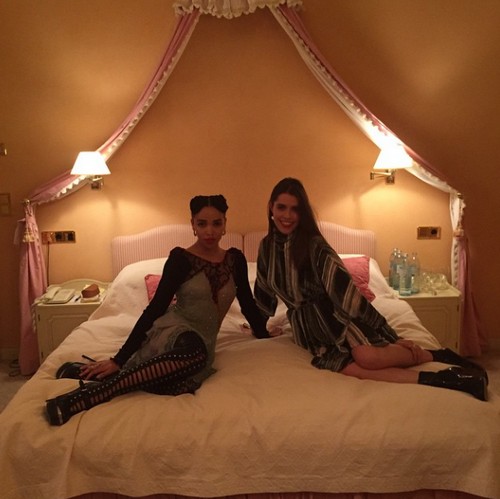 Robert Pattinson’s engagement to FKA Twigs is in trouble now that her naked bathtub photo allows him to at last see clearly what a famewhore is his fiancee. Robert Pattinson is head over heels in love with FKA Twigs, and that much is obvious to anyone with two eyes. However, he’s also not a complete idiot, and he knows that FKA is using him – at least, to some extent. We’re not insinuating that FKA Twigs doesn’t care about Robert Pattinson, or that she’s only with him to boost her career. At this point in both of their careers, FKA has gotten everything she could want from her relationship with him [on a professional level], and if she’s still with him, it’s because she wants to be.

However, that doesn’t mean that FKA isn’t still using Rob to some degree – even if it’s to keep herself on the A-list, not necessarily to benefit her music career. She knows that as long as she’s with Rob, anything she does or says will make headlines, and she’s taking full advantage of that.

For example, stylist Karen Clarkson [who works with FKA Twigs often] uploaded a picture to Instagram of FKA Twigs posing naked in a bathtub. In an extremely clever PR maneuver, FKA Twigs is minimizing backlash by not posting the picture herself, but she’s also maximizing PR coverage by having that picture uploaded at all. Obviously, Karen would have needed FKA Twigs’ permission to post the photo, even if it wasn’t FKA’s idea in the first place.

However, sources tell us that Robert Pattinson is starting to become aware of the extent of FKA Twigs’ PR shenanigans. And apparently, this is causing issues between them, and might even play a role in halting/postponing their engagement. Rob is still a very private person, and all of this public coverage is bound to start chafing on his nerves after a while.

What do you guys think about FKA Twigs’ naked bathtub photo, and Rob’s supposed response to FKA’s PR tactics? Let us know your thoughts in the comments below.