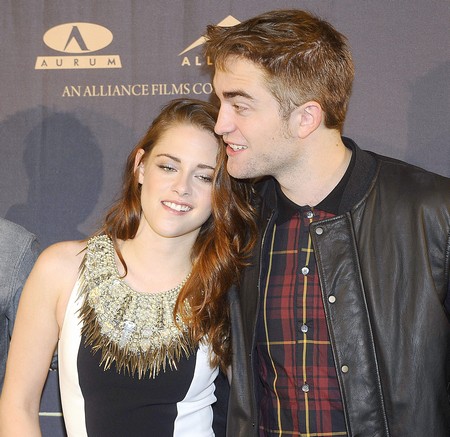 Robert Pattinson wants to put his wedding to FKA Twigs on hold – because he misses his ex-girlfriend Kristen Stewart! Twilight fans were not impressed when Robert Pattinson finally moved on with British singer FKA Twigs, and they were even less happy in early 2015 when it was confirmed that Pattinson and Twigs were engaged and would be getting married in a small and intimate wedding. Twihards couldn’t let go of of the thought of Kristen Stewart and Robert Pattinson getting back together, and apparently neither can Robert!

Kristen Stewart may have moved on with her new girlfriend and personal assistant/roommate Alicia Cargile, but that doesn’t mean Robert Pattinson is completely over his ex and fellow Twilight co-star. According to this week’s edition of In Touch Magazine, Robert Pattinson is getting cold feet and wants to put his wedding plans to marry FKA Twigs on hold – because he misses Kristen Stewart!

An insider dished to In Touch Magazine, “Rob says that he is still in love with Twigs, but he is not in love with the idea of marriage anymore. He is hoping for a very long engagement. Rob told pals that he misses the wild life he had with Kristen. Twigs is her polar opposite, which is part of the reason Rob loves her, but he can’t help but miss all of the spur-of-the-moment things that he used to do with Kristen.”

Ironically, Kristen Stewart and her girlfriend Alicia Cargile are also having some relationship issues right now, and K-Stew is feeling suffocated as well. Maybe this is a sign that Robert and Kristen need to give their relationship one more shot – after all they both seem to be missing what they used to have with each other. Do you think that there is any chance that K-Stew and R-Patz will get back together? Will he ever marry Twigs, or is this a sign that they are on the verge of a break-up? Let us know what you think in the comments below!