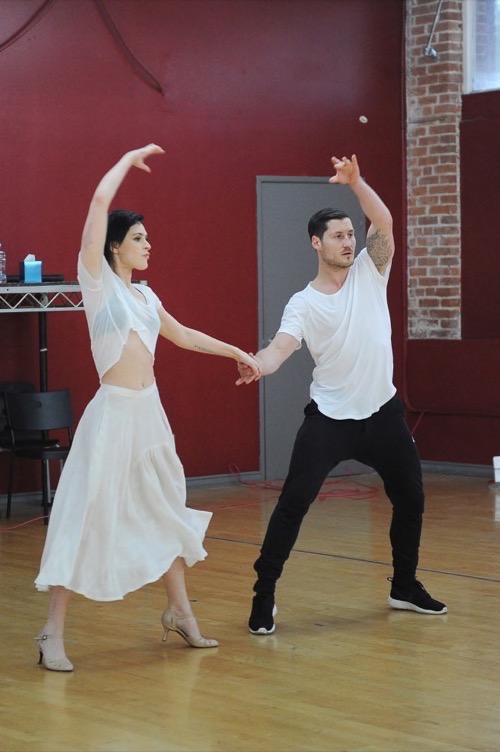 Tonight on ABC the glitz and the glamor returned to the ballroom for another great season of Dancing with the Stars.  On tonight’s premiere episode Rumer Willis and his professional dancer Valentin Chmerkovskiy danced a Foxtrot to “Take Me To Church” by Hozier.

If you are not familiar with Rumer Willis she is the daughter of Bruce Willis and Demi Moore.  Rumer began her acting career as a child starring with her mother Demi Moore in the major motion pictures Striptease and Now and Then. She is thrilled to be continuing her For the Record journey playing the Basket Case in Dear John Hughes. Most recently she wowed LA audiences as Fran in the Baz Luhrmann production at DBA, having portrayed Juliet in its prior incarnation at Rockwell Table and Stage. Known around Hollywood for her sultry vocals, Rumer and her band enjoyed a nearly 2 year Artist Residency at Hollywood hot-spot The Sayer’s Club.

Judges’ comments: Carrie Ann: “Where have you been? That was incredible, you are in it to win it. Len: It was intense, this could be your season.” Julianne: “What a vision, I have chills, oh my gosh. The passion you both had, you both are the ones to watch.” Bruno: “Focus, powerful, evolving and the best arms I have seen tonight.”

[Make sure to bookmark this spot and come back.  Video will be uploaded once it is released!]