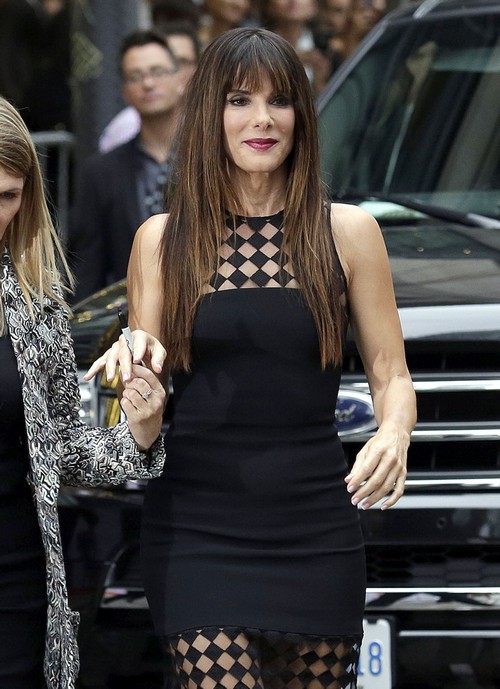 Has Sandra Bullock’s holiday happiness been shattered? Is the actress’s family too proud to accept legal help? Bullock’s 2015 has been filled with happiness – a new boyfriend Bryan Randall and a sexy new look – and a new addition to the family.

Sandra recently announced that she is adopting a three-year-old girl named Laila. But Sandra’s happiness could be ruined because her niece Karen is in big legal trouble after a drug bust. Allegedly that side of the Bullock family is too proud to accept help from the Academy Award-winning actress.

Sandra’s niece Karen Anderson was arrested for felony possession of meth in Washington County Oregon on October 24, 2015. A source recently spoke to Star Magazine and said that Sandra has no idea that Karen has reached rock-bottom – and Karen’s family won’t contact Bullock because they don’t want Sandra to feel obligated to help.

Karen’s mother is Bullock’s half-sister Katherine Anderson – and reportedly the half-siblings have a very strained relationship. A family friend reveals that Sandra isn’t one to let petty differences keep her from offering financial assistance with Karen’s legal problems. The source says if Sandra only knew she would be more than happy to step in and get Karen the best care and drug rehabilitation money can buy.

As far as anyone knows no one has reached out to Sandra, reportedly because the family doesn’t want to jeopardize Bullock’s finalization of Laila’s adoption. With as much star power and clout as Sandra Bullock has it’s unlikely that Karen Anderson’s legal problems would hamper the adoption. Sandra adopted now five-year-old son Louis while in the midst of a painful and messy divorce from Jesse James in 2010.

Adding to the family’s troubles, those in the know reveal that Sandra’s 90-year-old father John Wilson Bullock is in poor health and “living like a recluse in his Alabama hometown.” Sandra reportedly is trying to work with half-sister’s Nancy and Katherine to ensure John gets whatever is needed, but the sisters can’t seem to lean on each other long enough to coordinate John’s care.

It is not clear what happened to cause such a separation in the Bullock family, but an inside source divulged that if Karen, Katherine and Nancy were to reach out, Sandra Bullock would jump in and offer any help needed. The half-sisters should be able to lean on each other through the difficult times, but sadly, they don’t.