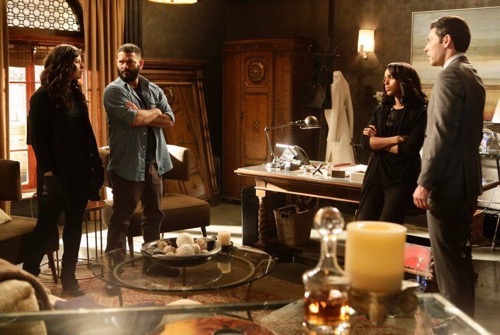 Tonight on ABC Scandal starring Kerry Washington continues with another exciting episode in an all new Thursday April 2, season 4 episode 18 called, “Honor Thy Father,” and we have the recap for you below. On tonight’s episode, a congressman seeks Olivia’s [Kerry Washington] assistance with his father, who’s serving a death sentence and nearing execution.

On the last episode, when Michael got himself in a bad situation, the Gladiators launched into damage control and put pressure on Cyrus to move up the wedding. Meanwhile, David took the first step in executing his plan to take down B613. Did you watch the last episode? If you missed it, we have a full and detailed recap right here for you.

On tonight’s episode as per the ABC synopsis, “a congressman seeks Olivia’s assistance with his father, who’s serving a death sentence and nearing execution. Elsewhere, David wants to solidify his case against B613 by finding its former members.”

Tonight’s episode of SCANDAL is going to be absolutely incredible and you won’t want to miss even a minute. We’ll be recapping it for you here live.

On #Scandal, David offers Jake an immunity agreement so he can testify against Command without facing charges. He says he also has Huck, Quinn and Charlie but Jake says he’ll die if he signs it. He says he’s out but David says they’re white hats. David says he can’t protect him if he doesn’t testify. Jake slams David on the table and says he’s the one who needs protection and threatens him if he doesn’t drop the case.

David makes a call to say plans have changed. Charlie follows Max Butler, another B613 guy. Huck goes to scoop up Margot Ross, another B613. Then Quinn goes after Simon, an older agent that Jake worked for in Europe. David tells Huck, Charlie and Quinn those three can be offered immunity and can be used to build a case. David says they’ll use them to reel in Jake and with him they can take it all down. Jake listens in on their plotting.

He says his dad confessed to shooting the guy – Dan Hoffman. That was 15 years ago. George Reed is about to be put to death. Nick wants Olivia to help stop the execution. He says he’s sure his dad didn’t kill the guy and doesn’t know why he confessed. He begs Olivia to meet with his father. Liz meets with Harmony to talk about Mellie. Harmony says people ask her why she’s loyal to Mellie and she says to tell her that she’s got her back.

Mellie is upset that Liz went to talk to her sister and Liz says her sister is 50 shades of angry and will spill to the first persistent reporter. Mellie tells Liz she’s her half sister and says she’s trash. Liz says she needs to reconcile with Harmony and get her on her team. Olivia goes to the prison to see George Reed. He asks who she is and says she’s there for five minutes to speak confidentiality. She says his son sent her. George says his son needs to move on from this.

Olivia tells him he’s going to die for this. George says he hasn’t been alive since his daughter died anyway. Olivia says she’s taking his case. She says she’ll make sure he walks out of there a free man. They bring the three B613 agents to the safe house and collect their phones. Quinn says they have a client with the George Reed case. Cyrus tells Abby that Harmony is in town and they have to keep her away from the press. Cyrus says this will end Mellie’s presidential hopes.

Mellie welcomes Harmony who looks whorish. Cyrus and Liz greet her. Harmony asks Cyrus about his prostitute and Cyrus says he married him. Mellie takes Harmony on a tour of the White House. Abby calls Olivia to tell her about Harmony. Quinn says George Reed was a single dad then Jamie hanged herself when her math teacher slept with her then broke her heart. Daniel was shot twice in the shot. Olivia says he probably slept with other girls.

They find a bunch of girls who said he was a predator who got what was coming. They tell Nick Reed they found a bunch of other girls which means a lot of other angry parents and maybe Hoffman’s own wife. Olivia shows up at Lisa Hoffman’s house and is told she died a couple of weeks ago. Charlie finds the B613 witnesses there and Jake still in the room. He attacks Charlie then gets away. Mellie begs Fitz to have a family dinner with her sister. He caves.

David asks if Charlie is sure it’s Jake. Charlie says no other agents will agree to help after this. Charlie says they need to kill Jake. Huck agrees and says Jake isn’t Jake anymore. He says Jake is in survival mode and is killing on instinct. Charlie tells Quinn in or out. She says she’s in. Olivia calls Quinn and says Lisa Hoffman died of cancer. She wants them to look for evidence. Quinn reminds Huck that Jake worked hard to rescue Olivia.

The sister leaves the house and Quinn and Huck go look for evidence. In the basement, Quinn finds a gun – the same caliber as the murder weapon. They call in an anonymous tip to the cops about the gun. Jake’s phone blips on and Huck tracks him.

Harmony tells Fitz how she got into making soap from deer and duck fat or bacon. Mellie tries to change the subject but Harmony won’t let her. Mellie tells him to call her husband Mr President and says he’s the leader of the free world. She says to show respect. Then Harmony goes nuts and says she’s trying to make her feel small. Mellie says she’s better than her and calls Harmony’s mother a home wrecking whore.

Harmony threatens to call Katie Couric. Fitz slams his fist on the table and says it’s enough. Harmony tells her to watch out. Charlie is where Jake’s signal indicates but doesn’t see him. They see that he’s at Liv’s building and call Olivia. She doesn’t answer so they head over. Mellie is drinking moonshine Harmony brought. Fitz tells her to apologize to Harmony. He says being president is picking among terrible alternatives. He says she needs to make her feel welcome.

Mellie says that was his job as husband of the candidate but he didn’t do it. She says to go away and let her drink her hooch. Huck and Quinn pound on Olivia’s door and find Russell there. Turns out Jake was across the hall. He says as long as he’s alive, Liv will be okay. He goes back in the other apartment and shuts the door on them. Charlie meets Huck and Quinn with coffee. David joins them and asks if Jake is bluffing. Huck says he doesn’t really know any of them.

David says they should just tell Olivia all of it. Huck tells David it’s over and they lost. David says they’re the good guys. Quinn says there is no justice on this one. Charlie shakes Huck’s and David’s hand and kisses Quinn and says it was an honor. He tells them to stay alive. David says Olivia won’t like this and asks how come no one knows that but him. Huck says Liv is family and he walks off. Quinn says they have no one else and tells him to be safe.

Fitz asks to see Harmony. He says Mellie has been unkind to her but is not ashamed or embarrassed. He says Mellie is jealous and the day her dad left for Harmony’s mom broke her. He says Harmony has what Mellie wants more in this world. He then brings Harmony to Mellie. Harmony hugs her and Mellie hugs her back. Harmony leaves. Mellie asks Fitz what he did and he says he did what he had to and says she’s going to win this race and he’ll be by her side. Cyrus listens in unhappily.

Olivia says the gun is a match for Hoffman’s death. She says they also know the gun was planted. Liv says Nick has been waiting for Hoffman’s wife to die and he put the gun there because he doesn’t want his dad to die for what he did. George tells him to shut up and not say another word. He tells Nick he’s all he has and he needs to respect him and shut the hell up. George goes back to his cell. Olivia looks at Nick. He says his dad told him he would kill himself if he confessed.

Nick says he’s trapped either way. He says he was angry and killed Hoffman for what he did to his sister. He says he should pay not his dad. David thinks about Jake killing James. He asks Holly to bring him some coffee. He calls Huck and says they have another witness. He says he saw Jake kill James and others. He says they can bring down command Jake. Of course Jake listens in on the call. Olivia talks to George and says Nick needs to accept responsibility.

She says he can get a fair trail with mitigating circumstances and says she can help him rebuild his life. She says Nick needs his dad. She says he lives alone, has never had a relationship and just works. She says he’s not free and he needs to let him go. Nick holds a press conference and confesses to killing Daniel Hoffman. He’s taken into custody and his dad is released. Huck waits for Olivia and says he’s there to protect her from Jake.

David is leaving the office while Jake lurks in the parking lot. Jake screws on a silencer and steps toward them. David and Holly are putting files in his car. Jake tells David to take a step to the left. He says he didn’t kill those three agents – he says Holly did and she was the one who tried to kill Charlie. Olivia tells Huck that she was with Jake when he heard David’s call. She says Huck needs to be honest with her not protect her. Jake says he wasn’t ever out.

He tells David that he’s coming for them all and they have to be prepared. Olivia answers her door. Russell is there but then so is her dad.