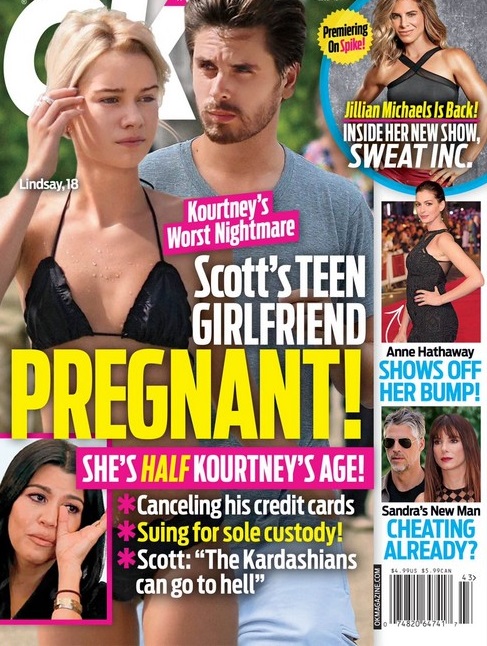 The funny part is – Lindsay denied the rumors that she was dating Scott Disick, and actually claims she has a boyfriend back home in Canada. Despite the fact that Scott implied on social media they were dating and posted pictures of Lindsay, she insists they were “just friends” and had no desire to be publicly linked to him.

This week’s cover of OK! Magazine features a photo of Scott Disick and Lindsay Vrckovnik – and the headline screams: Kourtney’s Worst Nightmare – Scott’s Teen Girlfriend Pregnant!” The tabloid’s cover goes on to tease that Kourtney is furious, and in retaliation she is cancelling all of Scott’s credit cards and suing him for full custody of their three children Mason, Penelope, and baby Reign. Pretty odd Kourtney cancelling Scott’s credit cards as he is a millionaire on his own, with no need for any of Kourtney’s financial support.

OK! Magazine goes on to claim, “Lindsay was terrified to tell Scott that she feared she might be pregnant, but he was totally fine with the prospect. He is clearly living in a fantasy world, he seemed to have already forgotten that he has a family already, and he is not exactly father of the year.” The tabloid then goes on to say that Lindsay and Scott are a match made in heaven, they love to party and jet set, and they’re going to live happily ever after with their new baby.

Yeah, we’re not buying it either. First of all, contrary to what the tabloids say – just because a celebrity has sex does not mean they are instantly pregnancy. Believe it or not, some celebs do have sex and don’t wind up with a baby afterward. Second of all, and this is how you know their story is likely false – Scott Disick was cool with learning his girlfriend was pregnant? Seriously?

Apparently OK! Doesn’t watch Keeping Up With The Kardashians – the last two times that Scott learned Kourtney was pregnant he had complete meltdowns, fell off the wagon, and practically ran away from home. But, we’re supposed to believe that he is happy about his 18 year old girlfriend’s imaginary pregnancy? Are you guys buying it? Let us know what you think in the comments below!