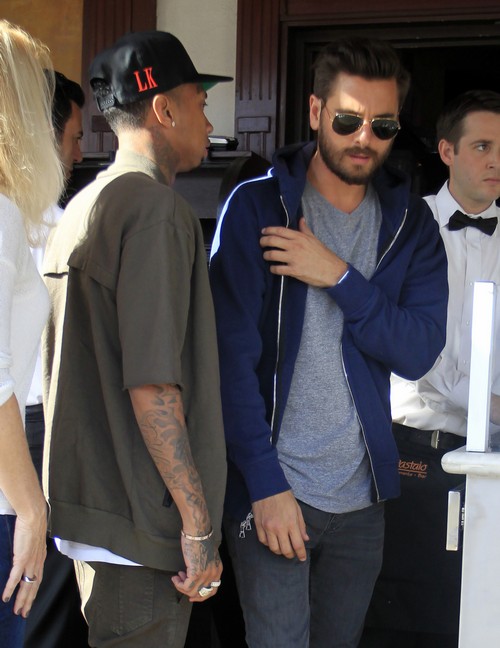 Scott Disick has not visited the hospital to see Kim Kardashian or her new baby boy and sources claim that Kourtney Kardashian’s disgraced baby daddy was told to stay away – so the exiled “KUWTK” star spent Saturday, December 5 looking at luxury cars with Tyga instead.

Kourtney Kardashian was at the hospital with Kim throughout the labor and delivery of her new son but Scott Disick was nowhere to be seen. Apparently someone else was tending to their three children because the bougie reality star was hitting up the car lots with Tyga in Beverly HIlls after having a very bromantic lunch at Il Pastaio together.

It’s possble that Tyga was looking to the “Keeping Up With The Kardashians” star for advice on how to win back his girl since Kylie Jenner is currently partying in Miami without him. If anyone knows how to win back a Kardashian after repeatedly screwing up it would be Scott Disick.

Scott and Kourtney Kardashian have broken up and got back together more times than we can count and it’s always because he did something stupid. Disick has been tangled up in more than his fair share of cheating scandals and drug abuse stories. Whether they are all true or not remains to be seen but through it all, Scott has remained welcome in the family.

As a matter of fact, it looks like Disick might have actually got his wish for yet another reconciliation wiith Kourtney Kardashian. Since actually finishing rehab on his fourth try, Disick and Kardashian have reportedly been seeking counseling together.

Scott has been slowly reintroduced to the family and now that he is sober and realizes that Kourtney will ruin him if Scott embarrasses her again, he’s really starting to grow up and act like a real partner and father. Of course Scott’s recent change in behavior may also be due to the set of rules Kris Jenner made Disick agree to in order to keep filming on “Keeping Up With The Kardashians.”

Anyway it’s obvious that Scott wasn’t welcome in the hospital waiting room while Kim Kardashian had her baby. It’s unclear if either Disick or Tyga ended up buying a car during their outing.With Tyga likely in the doghouse again, maybe the “Rack City” rapper is looking for another car to win back Kylie Jenner.

Scott Disick and rapper Tyga were spotted hanging out together in Los Angeles, California on December 5, 2015. FameFlynet